Divider and ruler are great theatre 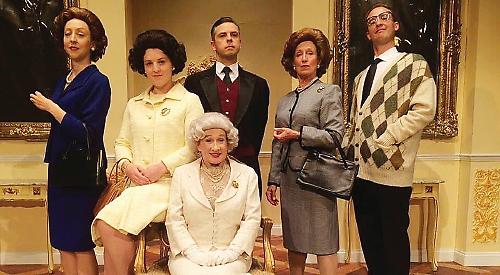 I HAVE to admit, we were a little apprehensive at the prospect of lengthy dialogues between the Queen and Margaret Thatcher, anticipating a potentially dry two-hander, but this was a lively, sparky and engaging show — with cameos that would do Spitting Image proud.

Moira Buffini’s imaginings on the weekly meetings between Her Majesty and the Prime Minister of Her Majesty’s Government were packed with insights, historical titbits and a cast of characters from the heady political days of the Eighties.

Born just six months apart and destined to take on the top jobs, both were pioneers in their own way — for better or worse.

The show captured the era they shared and its turbulent social unrest, with mass unemployment and miners’ strikes, the poll tax, the Troubles, the Falklands War, Rhodesia becoming Zimbabwe and the end of apartheid in South Africa in sight — all topped off with rampant consumerism.

Yet this show managed to infuse the history lessons and the sorrowful moments with a witty and irreverent musing on the way these two matriarchs navigated the waters.

With the clever device of having younger and older versions on stage — Q and T, Liz and Mags — enabling a sort of relaying of events and layers of retrospective comment, the banter between the two was brilliantly entertaining, with comedic moments like little firecrackers.

As we saw hints of the Queen’s socialist side, so Thatcher would throw back a retort about Her Majesty paying no taxes until 1993.

Conversely, the Queen’s wisdom and intuition in supporting the Commonwealth was offset against Thatcher’s steadfast refusal to budge on many subjects — not least on the issues of South Africa.

Then the icing on the cake came in the form of Liam Nooney and Jonathan Ray, bouncing around the stage, pointing out the protesters’ points of view, then variously playing Denis Thatcher, Geoffrey Howe, former MP for Henley Michael Heseltine, John Major, Kenneth Clarke, with Prince Philip, Ronald Reagan, Rupert Murdoch, the Queen’s press secretary Michael Shea, Arthur Scargill and more — not to mention both competing as Neil Kinnock — and, it has to be said, hats off to the show’s rendition of Nancy Reagan.

The additional device of breaking the fourth wall and addressing the audience meant that all these ingredients simmered nicely and produced some hilarious moments.

This production had its tongue firmly in its cheek.

Handbagged is the first in a six-week run of repertory shows from the creative and talented team of Made for Windsor — with Daphne du Maurier’s Jamaica Inn, Alan Ayckbourn’s Relatively Speaking, Francis Durbridge’s Fatal Encounter, William Douglas Home’s Lloyd George Knew My Father, and Ronald Harwood’s The Dresser to follow.