Timeless coming of age tales made for a spectacular show 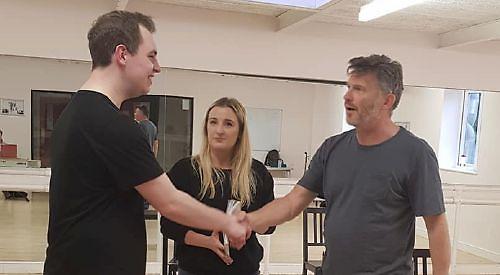 FROM the off, with the hauntingly powerful song Tradition, the Rep Company ensemble and band brought us a beautiful symphony and a timeless tale.

With childhood memories of singing along to If I Were a Rich Man, all the other tunes came flooding back and it was a delight.

It is early in the 20th century, and in the Ukrainian village of Anatevka, a shtetl in the Pale of Settlement of Imperial Russia, impoverished Jewish milkman Tevye has got his work cut out, with five daughters and a harried, hard-working wife, Golde.

As each daughter comes of age, the village matchmaker, Yente, and papa Tevye find their roles becoming increasingly redundant, much to Tevye’s chagrin.

Daughter Tzeitel eschews a match in favour of her childhood sweetheart, her sister Hodel falls for a revolutionary, and Chava looks outside the faith.

As he frets and we hear his increasingly fraught lament through asides to the audience and to God, the tragicomic refrain of the show is teased out, with spiralling thoughts: “On the other hand... but on the other hand...”

As the entire cast and musicians entertained us, the lovely klezmer music (umami for the ears) illustrated the highlights and the struggles of this community on the precipice of immense disruption and change.

With a lively wedding and bottle dance, not to mention a very tender scene between Tevye and Golde reflecting on 25 years of marriage in Do You Love Me? the melancholy of the encroaching dangers was offset by tongue-in-cheek moments, families rejoicing in unions, and wonderful singing and harmonies. Spectacular stuff.