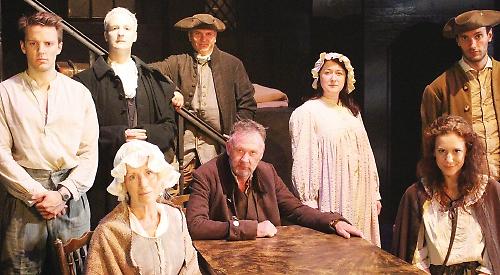 IN this, the second of six plays in the current Made for Windsor season, Daphne du Maurier’s classic story of hidden horrors in a remote Cornish hostelry was drowning in eerie undertones.

Mary Yellan has recently lost her mother and arrives at Jamaica Inn, deep in the heart of Bodmin Moor, to live with her long-suffering aunt Patience, who is married to violent bully and drunkard Joss Merlyn.

It is clear to Mary that this inn lacks the inviting warmth necessary to welcome weary travellers, and instead something more sinister must be going on.

Joss’s younger brother Jem on the other hand, despite being a horse thief, seems to be the polar opposite of his sibling.

In the meantime, Mary finds support via a mysterious local vicar, an albino named Francis Davey, who seems to know the moors like the back of his hand.

With a haunting, note-perfect a cappella accompaniment from Bridget Lambert as a kind of ghost of Mary’s mother as well as a voice of wisdom and of foreboding, and strong performances from Megan Cooper as Mary, Hilary Harwood as Aunt Patience and Christopher Lyne (Joss), Joseph Clowser (Jem) and Jonathan Ray (Francis), there was a sense of authenticity and we were cast back to a different era.

We had a real sense of Mary’s loss and confinement, alongside her tenacity in trying to help her aunt, as the nasty secrets of what Joss and his cohorts were up to were revealed.

As Mary tried to decipher Jem’s motives and whether he could be trusted, there were stormy seas ahead, yet her sheer determination to withstand bullying, and courage in the face of impending danger, was admirably portrayed.

This production was awash with unease, atmospheric effects and some perilous twists and turns.