You could be among the stars of this year’s panto 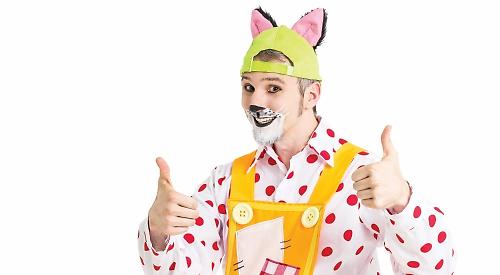 THE creators of this year’s Kenton Theatre pantomime will be holding auditions for ensemble roles in the production next weekend.

Following the success of Robin Hood last Christmas, James Tobias Clifford and Rochelle Parry of the Immersion Theatre Company returned to the New Street venue in February with their production of The Jungle Book — where they announced that Dick Whittington would be this year’s panto.

Tickets promptly went on sale — a good six months earlier than usual — while James got busy writing the script.

With that crucial task safely completed, he has now decided to join the cast himself — having wowed audiences as the dastardly Sherriff of Nottingham last time around.

James said: “We were asked a lot if we would be back when we were at the Kenton with The Jungle Book, so made the decision to make it work! I’ll be playing Timmy the Tom Cat, which is the comic role in this version.

“Everything has just clicked with this one. We’re going to hold workshops just to make sure it all works but I’m very happy with this script — I think it’s one of my stronger ones! It’s packed full of local references so it’s really Henley-centric, this one.

“I’ve got a number of very well known routines with a nice twist put on them, so I really think this is going to exceed Henley’s expectations beyond last year’s, which was so well received anyway. So yeah, I’m very excited.”

Further casting is still to be confirmed, but James and Rochelle are keen to involve the people of Henley and the surrounding area as much as possible in the production.

With that in mind, they have announced that auditions for the ensemble roles will be held next Saturday (July 21) at the Kenton Theatre, starting at 10am.

James said: “As was the case last year, it’ll be a seven-strong professional cast with the ensemble adding that extra panto magic. We now just need people to put themselves forward and apply!

“We’re looking for six senior ensemble. Given the size of the theatre space, I think too many more would actually start to become detrimental. But what will be so lovely is I think the ensemble will add to the community feel of the show, which is really important to us. It’s a way to build bridges beyond the relationships we’ve already got with the community.

“Also, I really just think the ensemble will help life the production values beyond what they’ve been in the past, because I really want Dick Whittington to be the biggest panto the Kenton has ever had — and indeed the biggest one that we as a national theatre company have ever produced.”

Have James and Rochelle cast people from the local community in previous productions they’ve done?

“Last year when we did a pantomime in Harrow we had juveniles for the first time and that was us kind of dipping our toe in the water and it was a really pleasant experience actually, so this year we’ve definitely committed to expanding on that and rolling it out across the Kenton panto as well.

“The ensemble are primarily dancing and singing roles and they’re really there to kind of make all the numbers really pop and bring them to life.

“Ensembles are really important because quite often everyone thinks it’s all about the principals but actually it’s not because everyone really does play an equal part in it.

“Without the ensemble the principals are left relatively exposed in these large routines, so the more ensemble we get with a higher ability the more intricate the choreography can be, the more exciting the routines can be and of course the better the show becomes.

“So these community roles really are going to be a crucial part of making this the biggest and best panto the Kenton has ever had.”

Prospective auditionees are asked to register their interest by emailing their name and date of birth and any relevant experience to henleypanto@hotmail.com

Applicants must be 16 or over on or before August 21, 2018, and out of secondary education by September.

Successful auditionees must be available for full-day rehearsals in Henley on November 25, December 2 and December 9.

They will then integrate with the principal company on December 10 — after which they will have the same schedule and will be required to attend technical rehearsals at the theatre on December 11, 12 and 14 and then every performance throughout the panto’s run from December 15 to 29, with no performances on December 18, 19, 20 and 25.

James added: “We’d love to hear from as many people as possible and we’re not by any means going to exclude anyone who maybe hasn’t had formal training or anything along those lines. We really do want everybody to get in touch — the more we have to choose from the merrier!

“Also, we’re a lovely team, you know? We’re not going to try and intimidate anyone — it’s going to be a really fun day and I would love so much for the community to become even more a part of this.”

• Tickets for Dick Whittington can be booked by calling (01491) 575698 or visiting www.kentontheatre.co.uk