Summer Shakespeare in the ruins has an Abbey ending 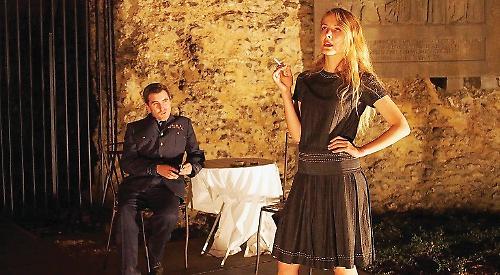 Much Ado About Nothing | Progress Theatre, Reading Abbey | Tuesday, July 10

In Trevor Dale’s Much Ado about Nothing the action is transposed to an English country house after the Second World War, giving the play’s concern with homecoming from war a more recent, recognisable context.

The social hierarchy of Much Ado is largely conveyed through military rank; for example, Don Pedro becomes Peter, a senior RAF officer, played as both laconic and mischievous by Matt Tully

One theme of this multi-faceted play is the guidance the old can offer the young. In Shakespeare nothing is simple and older characters can be mistaken and flawed but they still do a good job of guiding younger characters into the ways of love and marriage.

The message is that marriage is a good thing but equally a good match is hard to find.

Matt Urwin as Claudio is touching as a shy lover awkwardly wooing Hero (Taylor Rupp). Kate Shaw as Beatrice is stern, forbidding and intractable but also entirely likeable — an independent woman on the brink of the liberation the post-war world will offer. Benedick (Dan Clarke), a debonair RAF officer, is constrained by the caution conflict can induce; wartime seems no time to commit. Their fierce banter shows them struggling towards love and affection.

Arguably the whole play is about overturning Benedick’s adamant view that he has “no intent to turn husband” — as well as countering Beatrice’s negative stance towards marriage.

The narrative progresses through plotting and counter-plotting, the subterfuge fuelled by eavesdropping. There is disguise, deception and hiding to comic effect — and in a post-war setting, who else would be at the centre of double-dealing but a spiv, Borachio, played with convincing cunning by Alex Hobbs, and sponsored by the bitter, envious John (Ian Belcher).

But deceit can be spiteful and destructive. The comedy of errors turns sour in the marriage scene when Claudio, believing himself to be betrayed, turns on Hero with contempt. This is a painful scene, when the consequences of malice emerge all too clearly. Taylor Rupp shows Hero’s distressed incomprehension as she is wrongly accused and let down by both her lover and her father Leonato (Paul Gallantry).

Hero’s falsified death is designed to bring home the message that you don’t know what you’ve got till it’s gone, but that someone can be “slandered to death” is a sobering and very contemporary message.

Beatrice’s barely contained fury at the injustice of her cousin’s experiences lead to frank exchanges between Beatrice and Benedick that bring them together, even if they continue to argue all the way to the altar.

Pranks and tomfoolery together with the witty banter between Beatrice and Benedick provide much comedy. But let’s hear it also for the clowns, because it is ludicrous Dogbery (Mikhail Grozny) and his crew who expose treachery and put wrongs to right.

In the glorious surroundings of the Chapter House of the recently restored Reading Abbey on a balmy evening in July, there was a risk that the setting could steal the show — but it doesn’t, since the production is so strong.

Moreover, exits and entrances can be made with great style through the arches and aisles of the Abbey ruins.

Yes we are in the open air with traffic and planes overhead, but congratulations to the whole cast that they can be heard with no amplification.

As natural light fades, the stage lights come up on the final scenes of this poignant romantic comedy. Much Ado About Nothing in the Abbey ruins makes for a magical evening out — and a funny one too.