Black comedy with a heart marches to its own beat 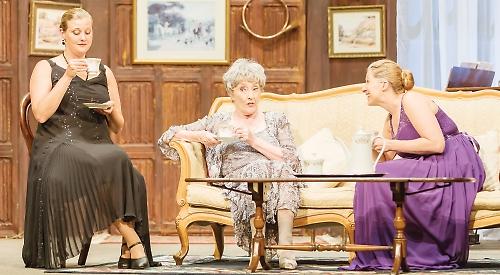 IN William Douglas Home’s black comedy with a heart, the Made for Windsor team presented a moving and very funny account of determination, longevity and loyalty.

Lady Sheila tries to cajole their son Hubert, who happens to be an MP, into badgering the Minister of Transport, but to no avail — and so she has declared her intention to do herself in the minute the bulldozers start.

This horrifies daughter-in-law Maud, while granddaughter Sally takes it on the chin, and the menfolk are generally perplexed.

As she enlists Sally’s beau, budding photojournalist Simon, to aid her cause and local vicar Trevor for moral guidance, Sir William’s former army comrade, loyal butler Robertson, keeps the household running smoothly, all the while his facial expressions and simple responses revealing nothing but saying everything.

In the meantime, the deaf and bumbling, daft as a brush Sir William alternates between dropping little gems of wisdom into the conversation and then completely zoning out.

As Lady Sheila gathers her thoughts, prepares her family and starts giving away her valuables, she goes into intricate and meticulous plannning mode, with choices of wood for her coffin, the epitaph for her tombstone, and even giving Hubert the option to add to it later.

She reflects on the 300-odd years the Boothroyds have been in the house, with a hilarious tale about an ancestor and a duck pond somehow adding to the gravitas.

The 50 years of marriage between the Boothroyds is summed up in some great moments, Sir William referring to his wife as “bonkers” while revealing that he follows the path she keeps him on.

With the play being named after an old schoolboy ditty said to have emerged some time around the First World War, and sung and played to the tune of Onward Christian Soldiers, this summed up Lady Sheila’s attitude and determination.

As they headed towards impending devastation, given a specific time to gather for breakfast, there was a strange kind of tension and affection between the characters, with the denouement telling us a lot about love, devotion and standing your ground.