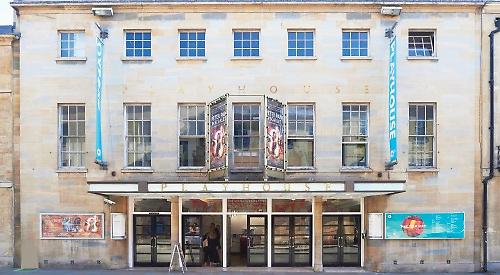 THE Oxford Playhouse will be celebrating its 80th birthday this autumn with a bumper season of shows and events including three world premieres, writes Matthew Wilson.

As a birthday gesture, the theatre in Beaumont Street will also be giving away free tickets to anyone else who turns 80 this year.

And on its actual birthday of Sunday, October 21, the Playhouse will be hosting an 80th anniversary gala.

Award-winning Oxford-based film producer Victor Glynn will be directing the show, with stars such as Christopher Biggins, Katy Brand, Sinéad Cusack, Patricia Hodge, Jeremy Irons, Freddie Jones and Gugu Mbatha-Raw already lined up to appear — with many more still to be announced.

As well as honouring the theatre’s history, the anniversary plans include a renewed commitment to create ground-breaking new theatre, with the Playhouse hoping to commission and co-produce three productions every year.

Looking ahead, the 80th anniversary season will feature four co-productions of major national tours. These are as follows:

• An exciting new production of Shakespeare’s Othello directed by Richard Twyman and co-produced with English Touring Theatre and the Tobacco Factory, Bristol, that runs at the Playhouse from September 18 to 22.

• A world premiere production of Women in Power, a new musical comedy based on Aristophanes’ Assemblywomen, in a co-production with Nuffield Southampton Theatre. Dates: October 3 to 6.

• A world premiere production of Angela Carter’s Wise Children, adapted and directed by Emma Rice, in a
co-production with Rice’s new company Wise Children and the Old Vic. Dates: November 13 to 17.

• A world premiere stage production of The Remains of the Day, based on Kazuo Ishiguro’s Booker-winning novel, in a co-production with Royal & Derngate Northampton and Out of Joint. Dates: April 16 to 20, 2019.

Oxford Playhouse director Louise Chantal said: “We’re aiming for the Playhouse to be at the forefront of producing theatres nationwide. We want to make shows in Oxford to travel the world, while continuing to bring the best of world theatre to Oxford.

“Oxford Playhouse has the bold ambition of raising an additional £120,000 this year too. This money will help sustain the future of the creative industries more widely, supporting emerging artists through our artist development programme Evolve, including an annual Made in Oxford showcase of local talent from 2019.

“Monies raised will enable the Playhouse’s participation team to increase the number of local young people the theatre works with to 30,000 a year across the whole of Oxfordshire.

“To achieve this target, we are organising a host of events and activities. Our anniversary auction will be online from October 5 to 26 with auction lots including private tours of secret Oxford, a selection of art and fine dining experiences, and even the possibility of owning the ‘Donald Trump Giant’ puppet from last year’s panto, Jack and the Beanstalk.

“We are also delighted to announce that Oxford-born Hollywood star Gugu Mbatha Raw MBE has recently become a patron of the theatre, joining a list of prestigious names including Dame Judi Dench, Rowan Atkinson, Stewart Lee and Patterson Joseph.

“Gugu started her career in the Playhouse pantomime Young Company and is now joining the A-list of Hollywood stars, having worked with the likes of Reese Witherspoon, Oprah Winfrey and Will Smith in films such as Belle and Disney’s Beauty and the Beast.”

Gugu said: “I am so honoured to become a patron of Oxford Playhouse. Having grown up on this stage, I feel a special privilege to know that I am joining such an esteemed group of patrons.”

Meanwhile, anyone who celebrates their 80th birthday this year and who would like to book a free tickets is asked to call the ticket office on 01865 305305. The tickets will be valid for Thursday matinées in the autumn 2018 season.

For more information and to book tickets, visit www.oxfordplayhouse.com

• With the 80th anniversary date fast approaching, the theatre is busy collecting memories and anecdotes of the Oxford Playhouse.

A spokesman said: “Theatre is all about stories and we would like to hear your stories of the last 80 years of theatre in the city.”

Audience members are asked to send their anecdotes or memories of the Playhouse to op80@oxfordplayhouse.com