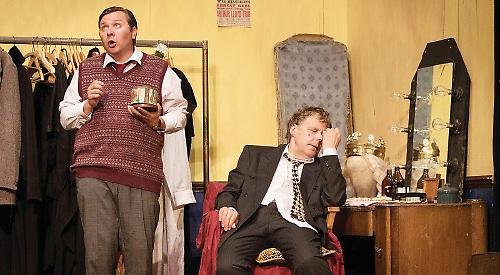 IN an apt finale, Made for Windsor chose to present a piece looking at the highs and lows, tensions and torments of life backstage in a travelling repertory theatre company — Ronald Harwood’s homage to actor-manager Sir Donald Wolfit is a tragi-comedy all its own.

In the build-up to a wartime performance in London, with air raid sirens and the Luftwaffe dropping bombs overhead, wardrobe manager and dresser Norman and senior cast member Her Ladyship despair at the mental condition — and the whereabouts — of “Sir”, who has played King Lear for such a long time that the character and his behaviour appears to be seeping into his bones.

With his last-minute return, just in time, existentialist ennui has set in and the stage manager Madge and her backstage team have their work cut out.

As long-suffering Norman and Her Ladyship lament the weary and underappreciated path of the rep company, reflecting on lonely late-night cold suppers and a threadbare existence, their loyalties to Sir remain, even as he reaches a nadir.

In a painful demonstration of subservience and deference, Norman, who knows Sir’s frailties and flaws inside and out, has his own support in the form of some Dutch courage.

With some excellent monologues and intense moments, each character slowly revealed what made them tick, how they interrelated and where the holes were.

As the backstage lights flipped from red to green, and Norman produced King Lear’s costume with a flourish, it was clear that in this drama filled with pathos and wrapped around a Shakespearean tragedy, all’s not necessarily going to end well.