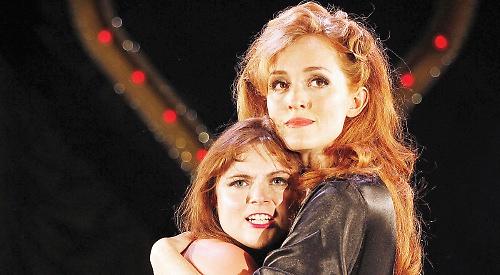 THE long-awaited and well publicised revival of the musical Sweet Charity has just opened with a big band fanfare of trumpets at the Watermill and judging by the audience’s reception on press night it is going to be well received.

Being the Watermill, it has the usual stellar cast of actors and musicians with Gemma Sutton heading up as Charity Valentine and an outstanding supporting cast that includes the excellent Vivien Carter as Nickie, Laura Sillett as Ursula and Rosie, Elliot Harper as Vittorio Vidal and newcomer Alex Cardall as Oscar.

The fairly flimsy plot tells a rather poignant tale of Charity, a nightclub worker who, despite cruel exploitation, never loses her optimism and hope of a future that will include stability and the love of a good man.

Sutton gives a great performance in the role and her voice showed some remarkable qualities.

With songs such as Big Spender, Rhythm of Life, and I’m a Brass Band you could be forgiven for expecting a big, brash musical extravaganza with lots of big chorus numbers, but by and large the direction and choreography (by the Watermill’s artistic director Paul Hart and Tom Jackson Greaves) were disappointing.

Admittedly, it’s not an easy piece to stage, having a rather ‘bitty’ book to work with, but with such an obviously multi-talented cast the dance numbers were relatively unimaginative and repetitive (where was the tap dancing?) and you felt so much more could have been achieved.

Director Paul Hart has tried to introduce a humour and quirkiness into the action, one assumes to reflect Charity’s quirky nature, which really didn’t sit at all comfortably with the main direction in which the original writers clearly meant to take the audience, and at times the deliberately silly use of props was little short of embarrassing. But there’s also much to praise about this show. There were some excellent scenes, particularly between Charity and Oscar and Charity and Vittorio.

The music was tight and well directed by Charlie Ingles, and designer Diego Pitarch had devised a superb set that was both lavish and simple at the same time, and served its purpose well.

The production runs until Saturday September 15. For tickets call the Box Office on 01635 46044 or visit www.watermill.org.uk