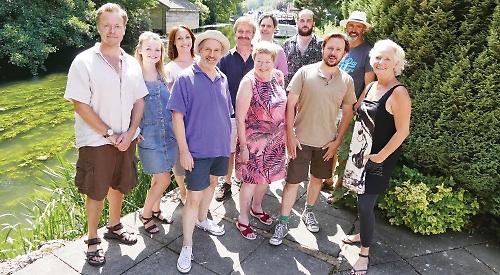 HE played Pandora Braithwaite’s dad Ivan in the hit 1985 TV adaptation of Sue Townsend’s The Secret Diary of Adrian Mole, Aged 13¾ and appeared in an episode of Only Fools and Horses the following year.

But Robin Herford’s big break in showbiz was one he gave himself — by commissioning and directing the production of The Woman in Black that opened in the West End in 1989 and is still going strong.

Based on the 1983 novel by Susan Hill, the ghost story is now the second longest-running non-musical play in West End history, after Agatha Christie’s The Mousetrap.

The Woman in Black’s stellar success has freed Herford up to pursue other projects — the latest of which is a production of Alan Ayckbourn’s 1977 play Ten Times Table that opened at the Mill at Sonning last night (Thursday).

A spokesman for the theatre said: “Long due a revival, Ten Times Table is a play so funny that it displays playwright Alan Ayckbourn at the top of his game.

“We follow the planning and disastrous outcome of a group of members of the Pendon community as they plan their small town’s first pageant, which is based on a long-lost piece of local history, the Massacre of the Pendon Twelve, where the Earl of Dorset crushed an uprising of rebellious workers.

“As the meetings in the run-down Swan Hotel progress, we see a natural division between right-wing supporters of the patronising middle-class Helen versus the bolshie left-wing teacher Tim and his two adoring female groupies.

“All have very different views of what the pageant should be and what it represents. Battle commences. The day of the pageant arrives. And what was a mock-up of the event now becomes the real thing as both sides clash with hilarious and riotous results.”

With a cast that includes stage and TV veteran Louise Jameson, it’s no surprise the Mill is promising “a laugh in every other line”.

As the director and the man in overall charge of the production, it turn out that Herford knows Ayckbourn’s work better than most.

“Quite handily for this play, my first job on leaving drama school was at the Stephen Joseph Theatre in Scarborough, home to Alan Ayckbourn,” he recalls.

“He had apparently started as a director but complained on one occasion that no writers asked him to direct their works. The response to him was simple — write the plays, then you can pick yourself to direct it!

“In a lot of ways, he still considers himself to be a director who also writes. I was lucky enough to be with the company when Ten Times Table was written and first performed.

“I found out how Alan had researched the workings of committees when he approached me and told me all the characters were based on people in the theatre’s organising committee. Oh, and would I like to meet the person my character was based on? I politely declined!”

Herford first became interested in the theatre world while a student — a relatively late start by the usual standards of the profession, as he freely admits.

“Acting was something I came to late but enjoyed doing. I discovered it while studying English and philosophy at the University of St Andrews and came to the decision near the end of my degree to trust my future to fate.

“I applied to six drama schools, reconciling myself to the fact that if all six turned me down it would probably mean my destiny lay elsewhere. As it turned out, I was offered a place at the Bristol Old Vic Theatre School, which had been my number one choice.” Working in Scarborough, he saw how plays were written and productions designed specifically for the venue in question — with the Stephen Joseph Theatre being “in the round”.

The Mill at Sonning’s stage is more of a half-moon shape, but Herford is confident Ten Times Table will work equally well there.

“The one advantage with the layout of the Mill — especially with a play like this — is it enables the actors to really engage with each other and maintain eye contact.”

What else can audiences look forward to with this production of Ten Times Table?

“Well, a series of committee meetings from November to June where a committee of locals is planning the first Pendon Pageant. A dramatic re-enactment of the saga of the Pendon Twelve and their ill-fated rebellion against the Earl of Dorset.”

He added: “As the meetings progress, so the committee splits into opposite factions and I was so delighted to be able to persuade Louise Jameson and Antony Eden to join me as the two lead actors.”

• Ten Times Table is playing until Saturday, September 22. For tickets and times, call 0118 969 8000 or visit www.millatsonning.com