Realistic political figures add intensity to this battle of wills 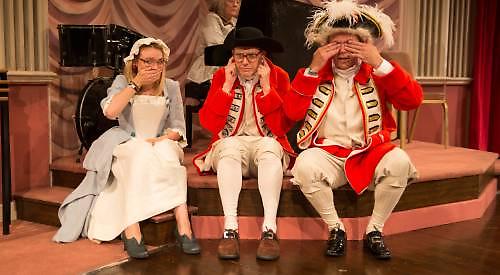 IF only all theatre could be as good as this: acting, writing and direction in perfect harmony to deliver a richly rewarding and funny night out.

Ten Times Table is a treat on every level from acute character observations to ridiculous slapstick.

Alan Ayckbourn’s skewering of the world of committees couldn’t be in safer hands with director Robin Herford wringing everything possible from the 1977 script.

This show does not date and the director’s smart move of channelling Boris Johnson and Jeremy Corbyn fits perfectly into a 40-year-old idea.

His fine cast, led by Stuart Fox as a put-upon committee chairman, nails those sometimes well-meaning but often small-minded folk who seek glory in public life.

This was Ayckbourn writing at the height of his powers when no one was safe from his acidic pen.

The town of Pendon has decided it must have a pageant and so they do what communities always do: form a committee — so they’re already several steps down the road to disaster.

The committee is made up of disparate characters who you know would never normally be in the same room — save for the husband and wife team.

Those of us who’ve been subjected to spending hours either reporting on committees, or actually being on them, will recognise this one instantly.

There’s the mild-mannered and idealistic chairman, beautifully nuanced from Fox, Louise Jameson as his wife determined not to be outshone by him, a bored dog fancier with Sarah Lawrie showing her range, a drunk who fancies himself as Boris Johnson, a Marxist who wants to build his own powerbase, a nerdy self-important councillor and his deaf mother. What could possibly go wrong? Everything. Committees don’t work by definition and Ayckbourn’s acute observations underline it yet again.

The egos inflate as time moves on, the pageant is hijacked for political purposes and the Marxist prints T-shirts of him in a bleached out black and white image which makes him look suspiciously like Corbyn.

There are few writers who can sustain four-fifths of a play with just people sitting around a table — yet we never notice the lack of movement so intense are the characterisations and so strong the humour.

And all of that changes in the final scene which is non-stop action and laughs as the plot reaches its preposterous but wholly plausible conclusion.

This writer has seen 20 shows this year and just four of them come from the top drawer — this is one of them.