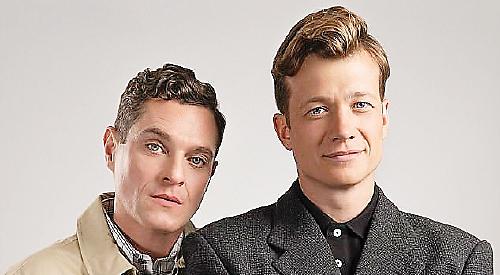 MAKING its Theatre Royal debut, Bill Kenwright’s production of Rain Man was a wonderful homage to an Eighties movie classic.

Upon the death of his father, Charlie (Ed Speleers) discovers a long-lost brother, Raymond (Matthew Horne), residing in a mental institution.

Learning that his entire inheritance will go to Raymond, Charlie is driven to borrow his brother for the week — and while Raymond struggles with human contact and interaction, he has numeracy skills that come in handy in a casino setting...

The story draws out a myriad of existentialist emotions, as snappy and selfish Charlie haphazardly attempts to add a little pizzazz to the life of his withdrawn sibling, and Raymond in return reveals some moving shared childhood moments. As they bond, we see more three-dimensional elements to Charlie, who realises that Raymond was the “Rain Man” he remembers as an imaginary friend.

As the accidental road-trip adventure drew to its conclusion, clichéd as it may sound, we were all hushed and awed. This was a very moving, well thought out production and the (full house) audience clearly thought so too — as they gave it a standing ovation.