Talk show giant puts himself in the chair 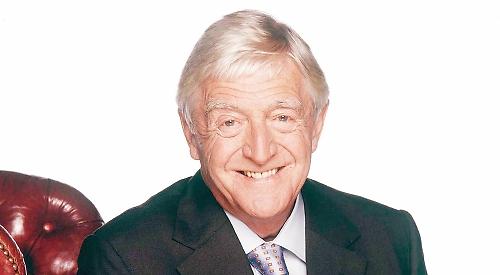 HE’S the interviewer’s interviewer whose Saturday night chat show encounters with the likes of Billy Connolly and Muhammad Ali have entered television folklore.

Henley audiences also know him from his regular appearances at the town’s annual literary festival.

But this autumn Sir Michael Parkinson will be taking to a different stage when he hosts a series of “An Evening with...” shows at theatres throughout the UK — starting with the Wycombe Swan next Saturday (September 1).

The two-month-long tour concludes at the Concert Hall in Reading on Friday, October 26, where he will be introduced by John Inverdale representing the Chilterns branch of disabled children’s charity Wooden Spoon.

Looking ahead to the show itself, what can the audience expect?

“Well, actually, I’m co-hosting,” says Parkinson. “The show is myself in conversation with my son and long-term producer, Mike, who takes me though my life and career with the help of some classic clips from the Parkinson archive.

“It’s the story of how I made it out of a pit village to the top of those famous stairs with all the highs and lows along the way in the company of Connolly, Ali, Lauren Bacall, Sir David Attenborough, Joan Rivers, Sir Michael Caine, Madonna and Dane Edna Everage, to name but a few. It’s a great show which I love doing and if I wasn’t on stage I’d buy a ticket!”

As a journalist he had started out in local newspapers before joining the Manchester Guardian and later the Daily Express before moving across into television, where he made his name as a current affairs reporter.

Interviewing himself for the introduction to his 2010 book Parky’s People, he revealed that the very first star he interviewed was the actor Sir Bernard Miles, who was so underwhelmed by the result that he sent the young Parkinson a telegram that said: “After reading your article today I have come to the conclusion that you should go far. Could I suggest Australia?”

Undaunted, Parkinson’s ascent through the journalistic ranks continued. But had he always wanted to host a talk show?

“They hadn’t been invented when I started my career as a journalist. I wanted to be Humphrey Bogart or Ernest Hemingway and be seduced by women who looked like Ingrid Bergman and Lauren Bacall. As it was, I joined a local newspaper aged 16 and started from there.

“Television came calling because, in the beginning, the TV companies had to raid Fleet Street — as it was then — for people who knew how to interview and get the story. That’s when I stepped on board.”

In the YouTube age it can sometimes seem as if Parkinson is most likely to be remembered for his impromptu studio wrestling match with the late Rod Hull and Emu. But looking back through the archives, does he have an interview he regards as his best?

“Not one you would expect me to say. It was with the eminent scientist Professor Jacob Bronowski. He was the writer and presenter of that landmark book and television series The Ascent of Man. It was the one time that the shape and progression of the interview went exactly the way I had prepared. But that was more to do with Professor Bronowski’s perfect command of the English language and his forensic mind than my interviewing skills.”

And his worst interview? “Once, when they were still with us, I sat down with Alan Whicker and David Frost, both of whom I liked and deeply admired, and we agreed to write down on a piece of paper the worst interviewee we had all interviewed. We then showed each other at the same time. Each of us had written down Thor Heyerdahl, the Norwegian anthropologist most famous for the Kon-Tiki expedition in the Pacific. We all agreed he would not be our first choice as a crew mate on a deep sea cruise.”

Not that Parkinson’s show was ever just about the chat, of course. His last ever guest in 2007 was the jazz-pop pianist and singer-songwriter Jamie Cullum, while the contribution of musical director Laurie Holloway was a key element of the long-running show’s success.

Fittingly, Parkinson says the proudest moment of his career was being awarded honorary membership of the Musicians’ Union. “Music has given me such joy in my life and my respect for anyone with musical talent knows no bounds. To be accepted into their inner circle without an ounce of musical talent is a real honour.”

When it comes to his own musical favourites, he says there are simply too many to list, but adds: “Here’s three that are near the top. I’ve Got You Under My Skin by Cole Porter, sung by Frank Sinatra with the arrangement by Nelson Riddle. Summertime by George and Ira Gershwin, sung peerlessly by Louis Armstrong and Ella Fitzgerald. Love for Sale, again by Cole Porter, played as an instrumental by the Buddy Rich Big Band.”

Changing the subject, what does Parkinson make of current British television?

“Slick, brilliantly produced and full of talent, yet sadly often soulless and derivative. I was lucky to come into television when I did.”

With that said, how does he see the role of the media in society?

“I’ve never found a better description than the original mission statement of the BBC — to inform, educate and entertain.”

Lastly, does he have any advice to offer today’s up and coming broadcasters and interviewers?

“It’s difficult to do so because the media environment they are coming into is not one I recognise nor to be honest understand. The only piece of advice I can give any aspiring interviewer is do your homework and listen.”

• Tickets for An Evening with Sir Michael Parkinson are priced £31 at the Wycombe Swan and £29 at the Concert Hall, Reading. For more information and to book, visit www.wycombeswan.co.uk or www.readingarts.com