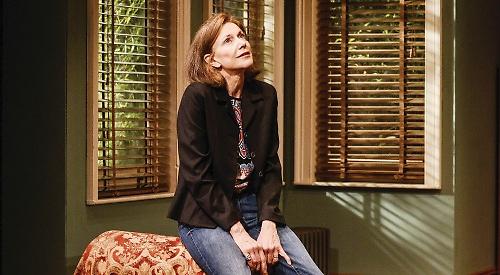 WE’VE seen Belinda Lang in countless TV and stage shows over the decades but it’s unlikely that any of them could match the tour de force she produces in Duet for One.

She’s on stage for two hours and not once does our attention falter despite the tough subject matter.

Her foil in this two-hander, Jonathan Coy, deserves equal billing for keeping the narrative going as it swings from triumph to tragedy and back again time after time.

Lang plays a brilliant violinist stricken with multiple sclerosis, Coy is the psychiatrist she sees under protest. Her husband thinks she’s depressed and needs help — although at the very heart of this, what else would anyone be having their life taken from their hands in a steady degenerative decline.

This is the conflict at the heart of Tom Kempinski’s challenging and often brilliant play: the psychiatrist, Dr Feldman, believes in life; Lang’s Miss Abrahams no longer has any reason to do so. How can these positions be resolved?

It would be a happy ending if they were, of course, but we’re talking about MS here and there’s not much hope in there.

Lang dominates the stage with her nuanced dialogue moving through sarcasm, cynicism, passion, rage, breakdown, conciliation and all those things over again.

She also turns out to be a skilled electric wheelchair driver, which helps the stage movement — essential in an otherwise very wordy piece.

There is a lot more than a two-hour therapy session to this play; that’s the dramatic structure but also a great way to examine what we want from life and how it can change.

Abrahams’ life was well set as a talented musician — not just her life, it was life itself. Then it was taken away and she floundered for a reason to live.

Feldman believes in life and music and demands that she listen to him. She does in the end, but does she take any notice?

No spoilers, but what’s the most likely outcome of someone whose life has been destroyed and whose last breath will soon be upon them.