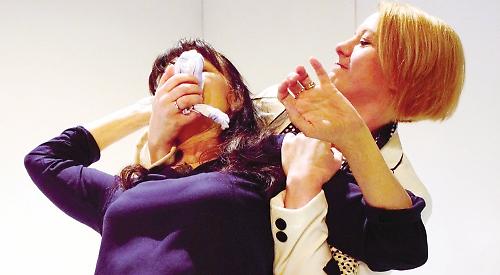 THIS chilling tale of friendship gone awry, based on Arthur Conan Doyle’s mystery tale, was a taut psychological thriller presented on a stark, spartan set.

From the start, this had a staccato pace full of nervous energy, with an apparent kidnapping.

Wynne Kordas and Smith managed to flesh out their characters’ personality traits a snippet at a time — revealing a slow burn of jealousies, spite and wrath just beneath the surface.

In a cat-and-mouse game involving accusations, dares, revelations and a deadly vial of poison, while requiring a good dollop of suspension of disbelief, this was both tortuous and torturous.

Against a dramatic white backdrop, we were shown just how these two women had come to be locked in a sealed room, ostensibly fighting over a man yet having been stuck in power play since childhood.

The clever back-and-forth agendas meant that we really didn’t know how things would turn out — glass half-empty or glass half-full? — although there were portents.

This was a strong two-hander which kept the audience guessing, right to the bitter end.