Cast of theatre’s new comedy ‘wood like to meet’ 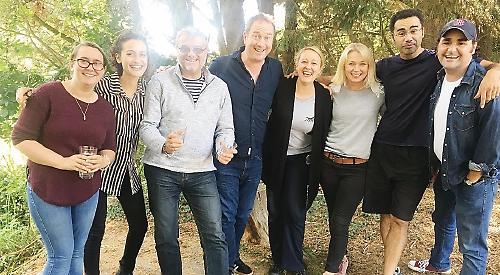 IF you go down to the woods today... you might just find the cast of the new Mill at Sonning production opening next Thursday (September 27).

Robin Hawdon’s sparkling comedy A Night in Provence is set on the French Riviera — where optimistic holidaymakers rent luxury villas for
exorbitant sums in order to get their annual fix of sun, sea and haute cuisine.

However, imagine the crisis if one such sumptuous place was double-booked.

Worse, imagine it triple-booked! By a French couple (Maurice and Yvette), an English couple (Fred and Judy) and an Irish couple (Shaun and Moira).

Marriages have floundered on less. Add in copious amounts of sparkling champagne, heightened sexual attractions, to say nothing of the deep-seated cultural difference, and all of this makes the current Brexit negotiations seem a snip!

A spokesman for the Sonning Eye venue said: “The Mill at Sonning has recently seen a number of hit comedies by Robin
Hawdon — including last year’s hugely successful Don’t Dress for Dinner and Perfect Wedding — but none threaten international relations on this scale. ‘Toujours l’amour’ becomes ‘tonight for sure’ in this hilarious comedy.”

The show is booking until Saturday, November 17. For tickets and times, call the venue on 0118 969 8000 or visit www.millatsonning.com