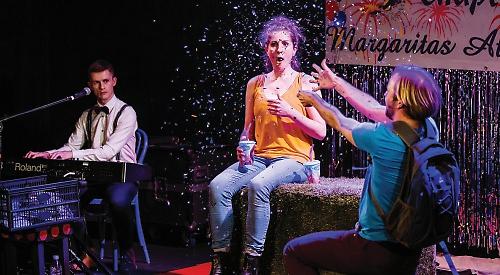 AN award-winning theatre company is bringing its critically acclaimed musical cabaret about depression to Maidenhead and Reading next week, writes Peter Anderson.

Be prepared to laugh, cry and even get a song or two stuck in your head, as Silent Uproar brings A Super Happy Story (About Feeling Super Sad) to Norden Farm on Tuesday (September 25) and South Street Arts Centre on Wednesday (September 26)

Influenced by the company’s personal experiences and informed by interviews with people living with mental health problems and medical professionals, it’s a joyful, buoyant, gleeful, slightly silly, sugar coated, unrelenting and completely super happy show! Except for all the bits about depression.

The show wowed crowds and critics alike at last year’s Edinburgh Fringe, where it won the Fringe First Award and Best Musical Award.

Silent Uproar is a Hull-based new writing company, commissioning writers to create playful and provocative work to help make the world a little less grim. They commissioned Jon Brittain to write a straight play as the original concept for the show.

Jon is a playwright, comedy writer and director who last year won an Olivier Award for outstanding achievement in an affiliate theatre.

In addition to writing several hit plays, he has also directed shows for John Kearns and Tom Allen.

The songs and indeed musical accompaniment for the show is provided by Matthew Floyd Jones, who freely admits to feeling at his most relaxed, when he is at his busiest, so he doesn’t have time to overthink things.

So how did he come to be involved in the project that started off as a straight play?

“John was commissioned to write this as a play for the group and had written the whole play and then said to them I know you wanted a play and not a musical but a really think it would benefit from some songs. They were happy to go with the idea and basically said do you happen to know someone who could write them for you?

“As luck would have it, prior to this I had met John on a weekend course that had been arranged. It was a bid to find some new partnerships that could write musicals and composers, playwrights and scriptwriters were brought together in a remote former stately home.

“John and I got on very well and on parting at the end we exchanged contact details and said we must work together sometime — and this is the result!”

Alex Mitchell, artistic director of Silent Uproar, added: “We wanted to make a show that was entertaining, accessible and discussed depression without being a depressing show. From suffering with anxiety and bouts of depression, and seeing friends and loved ones suffer, I wanted something that said it’s okay not to be okay. And most of all it’s okay to talk about it because the talking helps.”

The show is supported by NHS Hull Clinical Commissioning Group, which has not only funded the performances at the University of Hull to raise awareness of mental health issues among students, but also arranged for the cast and crew to have mental health awareness training via Hull and East Yorkshire MIND.

Silent Uproar is also hoping to have mental healthcare professionals at each performance. The idea is that if anybody is affected by the issues in the show, they will be able to talk to somebody afterwards.

For more information and to book tickets, visit www.silentuproarproductions.co.uk