Alan Bennett machine-guns his targets and hits them all 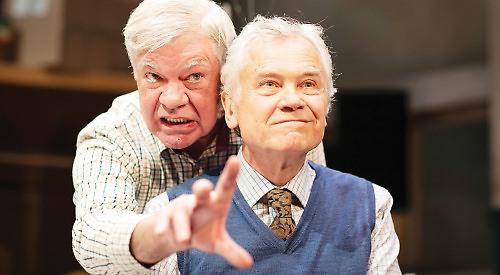 WHAT a jumbled-up glorious mess of a play this is! It’s by turns funny, sad, rude, very rude indeed and irreverent from beginning to end.

The Habit of Art is Alan Bennett writing about being gay in ways which might only have been seen in top shelf magazines before. But it’s not just that — he seems to have rounded up all his remaining targets and set about them with a scattergun.

Actors, playwrights, directors, artists, poets, preciousness, having to disguise being gay; Bennett goes for them in one giant belch. And pins them to the wall.

The Habit of Art is a play about a play and is made terrific on this tour from Original Theatre by two quite riveting central performances from Matthew Kelly as WH Auden and David Yelland as Benjamin Britten — and the actors playing them.

Confused? You think you should be but the skill of Bennett’s writing and structure never leaves you in any doubt as to who you’re listening to and watching.

The first act sees the gathering of a cast and production team for a play about Auden and Britten. Once they’re established, it gets on to them playing the play itself — but with frequent interruptions for actors’ egos to give sway.

The rehearsal room and the play itself weave in and around each other as Bennett launches barb after barb at the process and the people in it.

Just when you think you’ve got into the rhythm of a section, he breaks it up with some actorish ploy or other.

The second act becomes more earnest as Britten and Auden are given more time to develop with fewer breaks. But we never lose sight of the humour, nor the sadness of two old gay men who were never properly allowed to express their sexuality except as freaks.

And of course there’s lots of talk about art — poetry and music in this case — and of how they have to keep on doing it. They have the habit of art, as Bennett has Auden put it.

This very funny play still manages to be poignant and director Philip Franks never lets the pace drop. Maybe it’s not for everyone and there is unevenness over the two acts, but it’s a riot for this reviewer.