Freedom of expression drama speaks as loudly today as ever 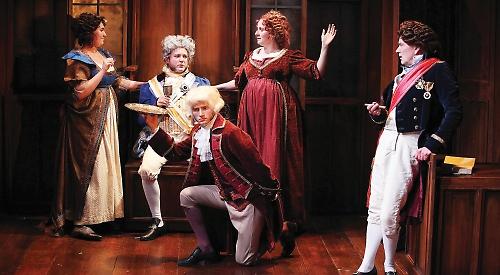 FOLLOWING the success of writer and broadcaster Ian Hislop’s 2016 play The Wipers Times, which he
co-wrote with Nick Newman, he was approached by a former controller of BBC2 who was an expert on Regency history, asking if he had heard of a man called William Hone.

Hone was a publisher and bookshop keeper in Fleet Street — an extraordinary man who championed civil liberties, campaigning for reform of lunatic asylums and the much-needed reform of the jury system.

This was all achieved by the publication of satirical pamphlets, helped by the political cartoonist George Cruickshank and supported by members of literary society such as Charles Lamp and William Hazlitt.

However, the good Mr Hone soon fell foul of the corrupt establishment and in 1817 endured not one but three trials for blasphemy in an attempt to gag him and get him transported to the colonies.

Needless to say, this story appealed to Hislop, who has been in the dock himself on several occasions, and the result was the play Trial By Laughter, also written in collaboration with Nick Newman, and now playing at the Watermill Theatre in Bagnor before starting a national tour.

It is beautifully written, and in Hislop and Newman’s expert hands the story of the trials is firstly extremely entertaining but also thought-provoking and informative, being as relevant in its comments about the freedom of the press today as it was back in 1817.

You are first struck by the excellent courtroom set designed by Dora Schweitzer with its very interesting clock face that propels you through time and back so ingeniously.

Meanwhile, superb direction by Caroline Leslie hands you the gift of being able to relax and enter completely into the story as it unfolds.

William Hone is played impeccably by Joseph Prowen in a remarkable performance that conveys every single nuance of each emotion Hone undergoes, while never losing sight of the strength of character, good humour and sheer goodness of this amazing man. But Prowen is not alone in being at the top of his game. There are many first-class performances in this production, not least Jeremy Lloyd as the Prince Regent, Nicholas Murchie as the Duke of York and Justice Abbott, and Peter Losasso as Hone’s collaborator George Cruickshank.

With the added bonus of music by Tom Attwood, together the cast wring every bit of fun out of this very interesting tale and provide a fabulous evening’s entertainment, yet not losing the serious issues the trials raised and that we still face today.

Not to be missed.

Trial by Laughter is playing at the Watermill until Saturday, October 27, then touring. For tickets call 01635 46044 or visit www.watermill.org.uk

Meanwhile, if you haven’t yet seen The Wipers Times, it is playing at the Arts Theatre in London until December 1.