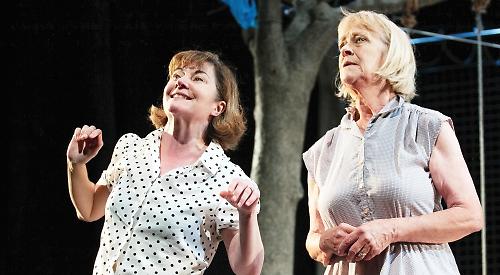 LONDON Classic Theatre's production of Charlotte Keatley's drama, spanning four generations of women and telling their very 20th century stories — from wartime to the Eighties — took a look at the trials and tribulations faced by these women, adeptly punctuated by the fashions of each period.

While the initial appearance of the characters as little girls with angry playground chants and taunts in a wasteland setting felt quite jarring, once the play settled into its stories, it all became much clearer.

This was a tale of meeting expectations, sacrificing wants and desires versus following your dreams, the cracks that can form through families sitting on secrets — and the unexpected sticking plasters and soothing balms that can result.

With the background settings of Manchester, Oldham and London, we met grounded matriarch Doris (an utterly convincing Carole Dance), pragmatic in dealing with wartime life, her daughter Margaret (Connie Walker), who in turn begat Jackie (Kathryn Ritchie), and as for Rosie (Felicity Houlbrooke)...

This had elements of Coronation Street, kitchen-sink dramas and melancholy. However, an uplifting vibe was provided by the clever use of contemporary fashions — everything from Twenties frocks, Seventies flares and Eighties hair to actual ski-pants.

As each woman addressed the issues of their time — be it put-upon and overworked, or relishing freedom tinged with deep regrets — it seemed as if between them these women had it all, but some bits were broken.