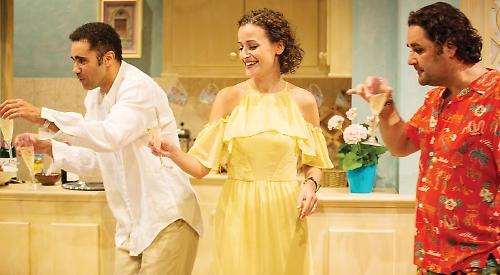 A Night in Provence | Mill at Sonning | Thursday, September 27

VERY, very funny thanks to some determined performances; rude, knowing, naughty and satisfying — A Night In Provence is a delight from beginning to end and is building a zinger of a
late-year season for the Mill at Sonning.

I wonder sometimes if I praise this theatre’s output too much, but then I see the shows and say no.

The Mill produces the ultimate in professional theatre — great movement, great diction, imaginative staging and real storytelling. And A Night in Provence continues those admirable traits.

Robin Hawdon’s lively comedy was written 15 years ago but director Keith Myers has made sure to keep up to date — with lots of Brexit references to give it even more bite.

The play presents us with a clash of cultures: sophisticated, sultry worldly French couple come up against a lairy pair from England and a bouncy Irish husband and wife.

The English and the Irish are boistrous fun-seekers who think they’ve booked a holiday villa on the Cote d’Azur; the French couple are the owners and have accidentally set aside the same fortnight.

That’s the framework for the story, then add Amber Edlin’s dutiful but frustrated wife spurning her husband’s advances in anticipation of lots of illicit nookie with their Irish friend Shaun.

They’ve been at it for years and use the annual holiday as a cover for their affair.

What’s great about Robin Hawdon’s plays — farces and comedies — is that he gets the sex in early; there’s no waiting about as people strive unsuccessfully to have it away and ultimately fail.

With Hawdon the deed is done and the comedy comes in dealing with the consequences. All four of the unwelcome guests have a separate agenda, but the French couple — wonderfully authentic performances from Laila Alj and Adrian Irvine — are united in their dislike of being taken over in their own home.

The Brexit jokes thread through this production, making astute observations without ever seeming to be partisan.

The whole cast throw themselves into the show with such conviction that you can’t help being swept along in the turmoil.

It would be impossible not to like Mark Pearce’s down to earth Fred — his expression and timing are perfect.

And Janine Leigh’s turn as unsuspecting betrayed wife is well judged managing to be funny and sad when necessary.

And Dan March’s wisecracking, boozy, lusty Shaun should have us annoyed with him, but he manages to present himself so warmly that we can’t help but like him.

We care about every character and the plots nips along at a fast but not furious pace.

This is a play for everyone, be they bawdy or sophisticates.