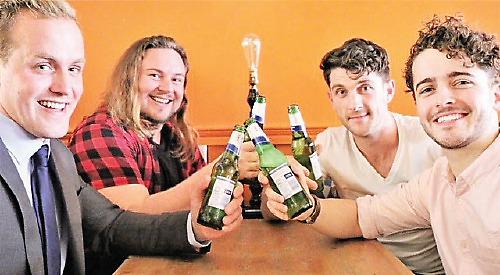 A NEW musical that was first performed in Henley last summer is transferring to the West End later this month.

Bromance: the Dudesical will open at The Other Palace on Tuesday, October 16, for a limited nine-night run that concludes on Wednesday, October 24.

All performances start at 8pm and the show is being produced by the same team that brought it to the HAODS Studio in New Street in May and June 2017.

Written by two young Americans, Kyle Ewalt and Michael Walker, the show is once again being performed “in the round” — but this time in a space twice the size.

Inspired by a real-life incident, Bromance follows the comic misadventures of a group of friends after one fateful St Patrick’s Day celebration in Chicago.

When Marty, a lonely IT guy who is new in town, runs into “best bros” Tom, Dick and Harry, he realises that he desperately wants to be part of their clique.

Amused by his naivety, Dick decides to take Marty under his wing, but first convinces his friends to teach Marty the art of “Brotocol” — the rules, joys and importance of being a real bro.

In order to prove his loyalty, the boys then take Marty on a series of hilarious “dudeventures” that get progressively crazier and more dangerous.

Robbie Smith, who played Dick in last year’s Henley production, will reprise his role — but the other parts have gone to new actors after fresh auditions were held at the end of August.

The show’s producer, Daisy Smith of How Very Productions, said: “We’ve had to re-audition because it’s such a team show — the five of them have to work so closely together, so if you lose one you have to look at the dynamic of everyone.”

The same could be said of the production team, where alongside Daisy’s co-producer Max Barraclough the personnel are the same as last year — with one key addition. Sarah Redmond returns to direct with Daisy’s husband Andy Smith as musical director, set design by Dan Gillingwater and lighting by Kim Hollamby. Sound engineer Joe Morris of Henley Theatre Services in Station Road is the new member of the team.

Daisy, 32, said: “We’ve got a new sound guy coming in because we didn’t need mics and stuff at the HAODS Studio but we will in London. Andy got in touch with a sound guy that he knows up in London and kind of said ‘Who’s good?’ And they were like, ‘Actually, there’s someone in your neck of the woods who’s really good.’”

While last year’s venue had 60 seats, the studio at The Other Palace has 120 — but the idea is still to make the audience feel as though they’re sitting in the Chicago sports bar where the musical’s characters first meet.

“We are having to rethink quite a lot,” says Daisy. “There’s a balcony now that we’ve got to factor in, so there’s currently lots of logistical talks about how we make it the same kind of vibe and make sure everyone can see the action.

“The HAODS Studio made a convincing Chicago sports bar on St Patrick’s Night, so that’s the same feel we’ve got to achieve there — we’ve just got to move things around. There’s a grand piano on the stage, so we’ve been talking about making that into the bar, almost, so that Andy looks as if he’s just been leaning up against it.”

Daisy adds that the team are also thinking of recruiting students from nearby drama schools to help create the right ambience on the night.

“When people arrive we want it to be the bar straight away, like it was in Henley, and have a couple of younger students for experience being the American bar girls — so we’re going to speak to some drama schools and see if they want to send a few down.”

As someone looking to launch a new musical in one of the world’s busiest theatre markets — at one point she says “I am literally competing against Cameron Mackintosh” — Daisy is clearly delighted to have secured The Other Palace as the venue.

“I wrote down my ideal list of venues — from the ridiculous and hopeful ones to the more realistic ones,” she recalls. “The Other Palace was on my list of unrealistic ones but they came back and said ‘We love it!’

“The Other Palace used to be the St James Theatre and then Andrew Lloyd Webber took it over. Heathers the Musical started there, so it’s known for new stuff, which is why I had them at the top of my list — I was in shock when we got it.

“There are shows that started there and then they’ve gone into the West End because they’ve got the studio and a bigger theatre — which is what Heathers has done.

“The plan is to go into the studio at The Other Palace — we’ve got nine days, nine shows there — and hopefully it’s great. And then maybe we look at coming back in the spring — go somewhere else in the spring that’s just a little bit bigger and you just build it up.”

Last year’s production garnered rave reviews — writing in the Henley Standard, Emma-Jane Taylor said the show was “full of great one-liners, great music and strong acting” — but that doesn’t mean there’s no room for improvement. Far from it.

“It was a workshop, really, in Henley,” says Daisy. “It was kind of working out how we did it — and did this work and did that not work? It was a lot of friends and locals and people that were supporting it, so it wasn’t really the big opening — whereas this is premiering the show for real.

“Kyle and Michael have rewritten a few bits from seeing the show on its feet — they’ve changed the skydiving scene because it all happens very quickly and they saw it and thought, yeah, we need to give that a bit more time.

“We’ve cut the SportsCenter song they did because there’s so many American references that wouldn’t necessarily work for this crowd. It would work in America but they said we can’t really change it to be about Gary Lineker — it would be funny but it wouldn’t work.”

The musical’s West End opening promises to be a landmark in a journey that for Daisy began two and a half years ago following her first theatre production — putting on the award-winning Broadway musical The Last Five Years for four nights at the HAODS Studio.

As she told the Henley Standard last year, she acquired the rights to stage Bromance in the UK after finding a song from the show via a YouTube search.

“I was going to do a charity concert in Henley and somebody wanted a funny male duet and I just couldn’t think of one,” recalls Daisy. “And I was just exploring and found that song, You Get Me, that was brilliant.

“I contacted the writers to get the sheet music for it and then just in my weird way got chatting to them and they were like ‘Oh, it’s part of a whole show — we’ve never done anything with it!’ And we kind of went from there.

“My husband says ‘Only you can manage to do that — you went to get the sheet music and now you’re doing the whole musical!’”

Tickets for Bromance: the Dudesical are priced from £10 (standing) to £17.50 (seated, studio floor) and £20 (seated, studio gallery and studio upper gallery). For more information and to book, visit www.theotherpalace.co.uk