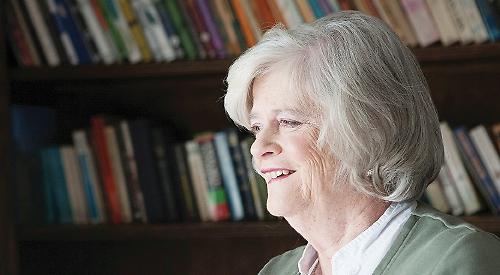 IT’S not very often that Ann Widdecombe is rendered speechless, but she had absolutely no answer to one particular left-field question from the audience.

As one of the most outspoken politicians of recent times who is approaching “national treasure” status, she’s never been afraid of courting controversy, delivering hard-hitting home truths, or indeed sending herself up in self-deprecating comedy.

And as she prepares to embark on her first ever national theatre tour with her one-woman show Strictly Ann: An Evening with Ann Widdecombe — which will bring her to the Kenton Theatre in February — it’s the chance to engage in cheeky banter with the unpredictable British public that she’s particularly relishing.

“One of the things I enjoy the most about going on stage in a show like this is that you never really know who your audience will be and what you’re going to be asked next,” she says.

“I’ve never said that any topic is off-limits in terms of questions and I’ve been asked just about everything in my time — from the ins and outs of my time in politics and showbusiness to more personal things like whether I’d ever envisage marrying, or regret not having children.

“But probably one of the most bizarre questions I have ever been asked was whether I could understand why anyone might want to have an extra-marital affair with former deputy prime minister John Prescott ... what are you supposed to say to that? I’m not struggling to come up with an answer very often, but that was certainly one of those occasions!”

Since standing down as an MP in 2010 after 23 years in parliament, Ann has earned her place in the public’s affections and been hailed a “national living treasure” by no less an authority than the Guardian.

Entertaining, enlightening and as controversial as you would expect, Margaret Thatcher and Craig Revel Horwood collide on this new tour as Ann lifts the lid on life behind the scenes in Westminster, as well as sharing behind-the-scenes gossip from some of the nation’s best-loved programmes, including her stints on Strictly Come Dancing, Have I Got News For You and Celebrity Big Brother.

“The show is split into two halves,” she says. “The first part involves me talking mainly about all the things I have done since leaving Westminster, and then after the interval it’s up to the audience to decide the talking points, as we move to a question and answer format.”

From her early family life in Singapore and her convent school days to her student ambitions at Birmingham and Oxford, and long-serving years as an MP, Ann can offer a unique insight into her time as a minister in three departments of John Major’s Conservative government, as well as life in the shadow cabinet after Tony Blair swept into Downing Street.

She is also happy to talk — as indeed she does in her autobiography, copies of which she will be signing on the tour — about the roots of her conversion to Catholicism in 1993, or her deeply held views on abortion and gay marriage.

“I don’t want people to think that this show is some sort of party political broadcast,” she says. “First and foremost it’s a night of comedy — it’s entertainment. Ever since I signed up to do Strictly Come Dancing I’ve discovered just how much I like making people laugh.”

So let’s talk about Strictly — how did that come about?

“I was approached to do the show in 2010, very soon after I had stepped down as an MP, and I viewed it as a good opportunity to try something completely different. It sent my life on an entirely different course, which I have been enjoying ever since.”

Ann admitted from the outset that she was “not interested in being sexy” while getting to grips with the raunchy rumba or sultry samba, and her laughter-filled partnership with Anton du Beke, which took her through to week 10 of the series on a wave of public support, became the stuff of Strictly legend.

She has become good friends with Anton, as well as the show’s pantomime baddie Craig Revel Horwood, and has this year teamed up with Anton once again to take part in the show’s upcoming Christmas special. “Before I did Strictly, I’d envisaged that life in political retirement would be quiet and peaceful, giving me time to write, and walk the dogs at my home in Dartmouth,” she says. “But doing that show led on to the live Strictly tour and I have ended up spending far less time at home than I expected, pretty much ever since.”

At one of those live Strictly shows, Ann was approached by a member of the audience who happened to be from the casting department at the Royal Opera House.

They felt she would be ideal in the comedic role of La Duchesse, in Donizetti’s La Fille du Regiment — previously played by the likes of Dawn French. Sure enough, Ann took to the stage for the first time in 2012.

“Thankfully, it was a non-singing part, because I’m tone-deaf!” laughs Ann. “But if being involved in Strictly was a dramatic change of direction for me, being on stage at the Royal Opera House was something absolutely no one could have ever predicted.” More stage work has since followed, and Ann has become a regular on the pantomime circuit. This year, she is playing the Wicked Queen in Snow White and the Seven Dwarfs at the Harlequin Theatre in Redhill.

It was Craig Revel Horwood, Strictly’s very own Mr Nasty, who first suggested Ann for pantomime. Despite having his claws out for her dancing talents on the TV show, the pair have become firm friends, with Craig saying: “Ann is extremely entertaining and such a sport.”

Away from the showbiz limelight, Ann has also developed a career as a celebrated writer.

When she stood down from the shadow cabinet in 2001, where she had served as both shadow health and home secretary, it was a chance to finally devote more time to putting pen to paper.

“I’ve always been a scribbler, writing down bits and pieces from my time at school, but it was only when I left the shadow cabinet that I really found it freed up enough time.”

Her first novel, The Clematis Tree, made it into the top 10 of the bestseller lists, and she has since written a series of books, both factual and fiction, as well as her autobiography, Strictly Ann, which was published in 2012.

So is there anything else still on Ann Widdecombe’s bucket list?

“I’m not really looking too far into the future at the moment,” she says. “Just enjoying the variety which is in front of me right now. I love doing pantomime and hearing the sound of young people laughing, and can’t wait to meet people on my new tour throughout 2019. Apart from that, I’ll carry on writing, and I have some speaking dates planned on cruise ships too, so it is going to be a busy year.”

She’s not missing the cut and thrust of life at Westminster, then?

“I can’t ever remember a time when both of the main political parties have been in such a mess at the same time,” she says.

As a fervent supporter of Brexit, she’s also concerned that we will be leaving the EU in name only under the current proposals.

“There should be only two things to agree in terms of our departure from the EU — the size of the divorce bill, which it is only right that we should have to pay, and the trade agreement after we go.

“Anything else means we will be half in and half out, which is not what people voted for and not what anyone really wants.”

• Strictly Ann: An Evening with Ann Widdecombe is touring to the Kenton Theatre on Wednesday, February 20, followed by Norden Farm in Maidenhead on Thursday, February 21. For tickets and times, visit www.kentontheatre.co.uk or www.nordenfarm.org