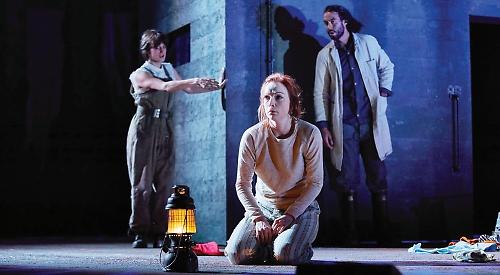 WHEN the National Theatre does anything it does it big — really big. So big that you need the biggest possible stage. Which is why their Macbeth is at the New Theatre in Oxford this week.

Usually it does it really well too, so it was a surprise to hear that this production was panned by the critics in London.

Something must have happened somewhere on the M40 between the South Bank and Oxford because it’s transformed into a magnificent show.

This Macbeth is gripping, gory and powerful from beginning to end. The witches clamber up poles and keen in an eerie reverberation, attitudes are bloody and all nobility is stripped from the characters.

These are ruffians and brigands with Macbeth as the overambitious, paranoid tyrant. Opponents and friends are ruthlessly dispatched in this — seemingly as ever — post-apocalyptic gangster world.

Deception and lies rule, truth is imprisoned. The rule of law is surrendered to the man with the biggest fists and the sharpest sword. The bard wrote Macbeth during in 1606 but its central truth about human faults doesn’t change.

The lead performances of Michael Nardone as Macbeth and Kirsty Besterman as Lady Macbeth are outstanding, as is Patrick Robinson’s Banquo.

The cold and dark set has all the hallmarks of a National production because it may be sparse but it’s BIG.

So what happened in London, then? The show has been recast and that frequently changes the dynamic — or it might have been that the London critics felt they’d seen it all before.

Maybe they had. I probably have as well, but this remains the best Macbeth I’ve seen — and I saw Sir Alec Guiness in the role in 1966, so it’s a high bar.