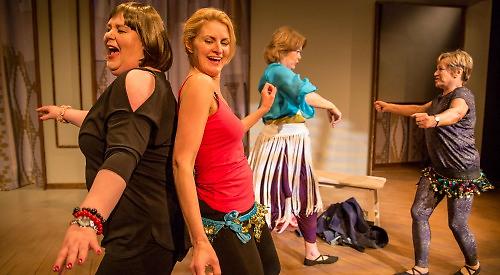 A Belly Full | The Mill At Sonning | Thursday, May 2

THERE’S some great writing in A Belly Full and some very funny moments — as you’d expect when you throw a group of women unknown to each other into a belly dancing class.

This world premiere by Marcia Kash and Mary Colin Chisholm has a lot of potential. And it will be interesting to see how the play develops in the future — the first draft is never the last, as all writers know.

The writers have chosen to take the model of a group activity — belly dancing. It’s a way of keeping fit, getting out of the house and meeting new people.

But instead of keeping the action in a drafty church hall with the characters interacting there, they concentrate on two intertwining stories outside.

In some respects it’s a shame because they’ve created some interesting characters — a snotty teenager, a sexy cake-company new mother, her supportive best friend, a vicar’s wife, a seen-it-all nurse, a breast cancer survivor and the belly dancing teacher, Shalimar, who is not all she seems.

The fun with this type of story is in bringing these disparate characters together in the forming, storming and norming ritual which leads to all sorts of drama and conflict.

But not everything has to follow the same pattern.

So the frazzled new mother and partner struggling to find an 18-minute window to have sex in between baby going to sleep and taking the carrot cake out of the oven sets the scene for future laughs and tears.

So does the poor agoraphobic writer trapped in his flat with only his
put-upon wife to keep him in touch with the world — these were some of the most poignant and convincing scenes, with Peter Hamilton Dyer turning in a very good performance.

The tension comes from three sources: will agoraphobic Brian ever venture beyond his door again? Will sexy-cakey Marnie forgive her partner? And will the belly dancing class manage to get their show up at the church function?

The last is quite hard to sell because, although the play centres on belly dancing, there really isn’t that much of it. We don’t see them develop their skills from newbies to experts.

However, there are some great lines — watch out for a penis cake dialogue meant for a hen party.

And the very cleverly handled reveal at the end of the first act was a perfect example of showing, not telling.