TV comedian is looking to her legacy with latest show 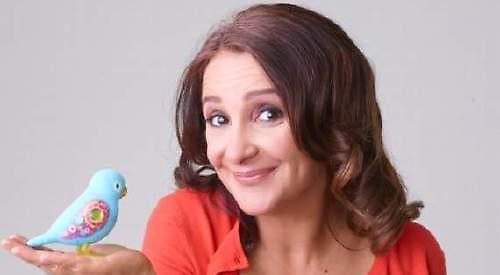 SHE’S appeared on the likes of QI, Room 101 and Live at the Apollo, while also shining on quiz shows The Weakest Link and Pointless.

More recently, comedian Lucy Porter has been displaying her considerable erudition in her latest live touring show, Pass It On — the final date of which is at Norden Farm Centre for the Arts in Maidenhead next Friday (May 31).

The show follows Lucy, 46, as she explores the concepts of heritage and tradition. What have we received from our parents and what will we pass on?

Lucy inherited global warming, dodgy knees and a terrifying collection of glass clowns from her mum and dad, so now she’s thinking about the legacy she’s going to leave to her children and the world at large.

Stand-up is among the most ephemeral of arts, which leaves Lucy worrying that her life’s work will disappear when she does.

But comedy is also an art form that arguably dates back to the medieval fools. Does Lucy think this is a heritage and tradition that’s worthy of protecting?

“I think it definitely is,” she says, “but I don’t think it is something which is under threat as it works on so many levels.

“It can poke fun at the establishment of the day, but if like now there is a great deal of angst in the land then stand-up can also give the audience a release from that with an evening of escapist humour and pure silliness.

“The other advantage in times of austerity is that stand-up is relatively cheap. One person with a chair, and a microphone, and possibly a glass of something can keep an audience enthralled all evening. Way cheaper than a cast of eight plus and an attic full of scenery a team has to keep moving about!”

Lucy’s performance on a series of TV quiz shows has earned her a deserved reputation as one of our brightest and most knowledgeable stand-ups.

Amid all the glittering temptations of light entertainment, would she ever consider going down the Strictly route?

“I think what my children would say if I went on Strictly is unprintable! I love doing programmes like Celebrity Mastermind and Pointless Celebrities because I know I should be good at them. Perhaps I should draw a veil over my appearance on the latter with Rob Dearing — we didn’t cover ourselves in glory!

“The one thing I know for a fact is I cannot dance a step! I had a lovely choreographer try and teach me a small routine for one of my previous shows — she despaired of me!”

Lucy is currently working on a number of book projects. Is that an attempt to create a legacy or just add another string to her bow?

“Maybe that should be ‘attempting to write a book’ — I currently have four unfinished books on the go!

Is she disciplined when it comes to sitting down and writing? “Anything but. I am a disaster and forever getting distracted. Probably not helped by the fact working from home consists of me having to clear the kitchen table every time.

“My husband did have the brilliant idea of hiring an office — I was so lonely after not very long working I went out to get some sandwiches for lunch.

“It used to take a fair while to pick the sandwiches and eat them, then when I should’ve got back down to work, I just felt so lonely so I came home!”

If she could pick two or three people from any era of human history to babysit her children, who would that be?

“There’s a nice thought, celebrity mentoring. I am just reading Michelle Obama’s book — she would be great. Can I count her and Barack as one? Then I fancy having Buster Keaton to teach them physical and slapstick comedy — perhaps I won’t think what the house will be like afterwards. Finally, my son is really getting interested in things, so I think Albert Einstein would really fuel that quest for knowledge.”

Tickets for next Friday’s show are £15. For more information and to book, visit www.nordenfarm.org