It’s not over till the whole cast sings 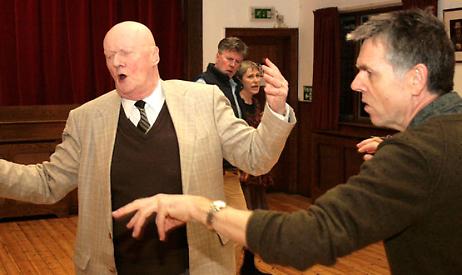 Henley Players’ Quartet by Ronald Harwood, playing at the Kenton Theatre on March 19 for four days, differs from last year’s film of the same name in that audiences will actually see, as well as hear, the famous quartet from Act III, Scene 1 of Verdi’s Rigoletto from which the play gets its name, writes Bill Bowder.

The play, like the film, is set in a residential home for older opera singers. But filmgoers said they were disappointed when its director Dustin Hoffman skipped the money shot and panned away just as their concert began. They wanted to see how well its four stars Maggie Smith, Tom Courtenay, Billy Connolly and Pauline Collins would have sung the quartet which is the point of the plot.

Henley theatre-goers can now experience those missing four minutes as the Henley Players’ cast of Frank Augur, Caroline Bowder, Jenny Haywood and Andy Marlow give full operatic force to the love tangle in Rigoletto when, as Reggie/Duke of Mantua, Jean/Gilda, Cissy/Maddalena and Wilf/Rigoletto they close the concert (and the play) with the most famous performance of their lives. To make sure they get the mood right, English Touring Opera’s Tim Yealland, brother of Henley resident John Yealland, gave up his time last week to put the cast through their paces.

“Think in sevens, one, two, three, then move, four, five, six, then look,” he told them in Harpsden Village Hall hall where they had been rehearsing twice a week since January. For actors whose whole instinct is to look at each other and combine speech and action, the ways of grand opera were a shock.

“We may not do it like this nowadays, but we want to be true to the way opera was then,” Tim said. “You were stars,” he reminded them.