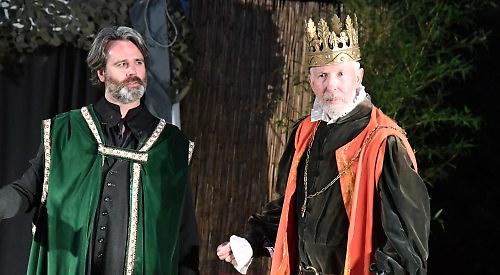 OPENING with a dramatic storm, swelling seas and men overboard, the audience for this production of The Tempest was forewarned of a powerful production to come.

A single crow, black against the evening sky, flew over the set. No director could have wished for a more powerful portent of the disasters to unfold.

John Timewell, the director of this Garden Players production, had no need of such happy accidents for he is a director par excellence.

His skilled direction made for a memorable production of The Tempest, where his skills brought out the very best in his cast.

Had the cast maybe workshopped the text, developing the subtext and the subtleties of their various characters?

Surely they had for every nuance of Shakespeare’s play was teased out and glorified. Every actor’s body language was rehearsed to perfection, emphasising his or her reactions to events, spoken or not.

Grainne Harling (the spirit, Ariel) wafted on and off stage to perfection. Her ambivalence towards her master, Prospero (Tim Harling) was painful to see.

Will he, won’t he, set her free? What price her freedom from the master she obeys and adores? Poor perfect Ariel.

Emily showed only adoration but Nick did naughtily share his initial misgivings with the audience. The cast were word-perfect, the timing — so often a weak spot in amateur productions — was perfect.

The costumes,
co-ordinated by Isabel Foley, were carefully planned, the colours and tones adding another layer to the various characters.

It was Caliban who stole the show. Yes, his is a pivotal role in The Tempest, but James Gwynne’s portrayal of this half-witted cripple was beyond praise.

His body language with the turned in foot, the shaking bent hand, the dribbling and drooling, the stammering speech — a memorable performance.