Gripping thriller ‘could be happening to you’ 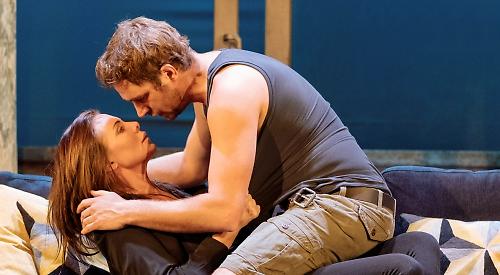 IT’S one of the biggest-selling novels of the decade and was made into a film starring Emily Blunt and Justin Theroux.

Billed as “the thriller that gripped the world”, the seemingly unstoppable march of The Girl on the Train continued earlier this year when the stage adaptation embarked on a UK tour that took it to the Oxford Playhouse for six nights in July.

Starring Samantha Womack, the show proved such a draw that an autumn leg of the tour with 14 new venues has been added — one of which is the Wycombe Swan from September 17 to 21.

Womack plays Rachel Watson, an unhappy alcoholic who longs for a different life. Her only escape is the perfect couple she watches through the train window every day, happy and in love. Or so it appears.

When Rachel learns that the woman she’s been secretly watching has suddenly disappeared, she finds herself as a witness and even a suspect in a thrilling mystery in which she will face bigger revelations than she could ever have anticipated.

After watching Womack’s performance, novelist Paula Hawkins said: “Sam was amazing. You could literally hear a pin drop. Everyone was holding their breath.”

That’s certainly the effect director Anthony Banks was going for, having promised that the stage adaptation “is absolutely packed with twists and turns — more than I’ve ever had to juggle before”.

Acclaimed for his direction of Gaslight and Strangers on a Train, set in the Thirties and Fifties respectively, Banks believes the fact The Girl on the Train is set in the present day, in familiar but unspecified locations, is an extra lure for theatregoers.

“It’s instantly recognisable for that reason,” he says. “And it could be your street — they could be your neighbours. This could be happening to you.”

Before rehearsals the director met with Paula Hawkins and they talked about how Rachel is losing her grip on her identity because of the effect heavy drinking has on her short-term memory.

“Because she can’t remember what happened last night or last week, she starts to forget who she is. Her identity is eroding and she describes it as a black hole so the design is also a black hole in which appear domestic spaces, a train, a police cell, an interrogation room and also the wasteland by the train tracks where the body is found.”

Rachel is a dream role for Womack, who recalls being gripped by the novel when she read it, and also a challenging one. “There are about 70 pages of dialogue for me to learn,” says the actress, who is probably best known for playing Ronnie Mitchell in EastEnders. “It’s like playing Hamlet,” she smiles. “I never shut up.”

Having appeared in the West End in Guys and Dolls and toured in South Pacific and The Addams Family, Brighton-born Womack isn’t as worried by all that dialogue as she is about the challenge of playing a convincing drunk.

“It’s a really hard thing to do,” she says. “Drink is like a truth syrup that removes all the boundaries so rather than a comical element, with the slurring and slipping up, I think Rachel’s just completely unpredictable. It’s about what happens when she’s drunk and where does her brain go?”

Womack is chatting during a break from rehearsals in an East London studio where she and co-star Oliver Farnworth (who plays Scott) have been running through an intense scene where tensions flare up between their characters.

Careful not to give spoilers, Farnworth says of Scott: “Throughout the play you’re drip-fed more information about him, so the audience gets to build up a case file. Has he been left by his wife? Has something happened to make her run away? Roles like this are more interesting to me as an actor, rather than playing the Prince Charming nice guy, boyfriend-next-door sort of thing. I like roles that have a bit of meat and a bit of weight to them.” Also in the cast are John Dougall as Detective Inspector Gaskill, who is investigating Megan’s disappearance, as well as Kirsty Oswald as Megan herself. Adam Jackson-Smith plays Rachel’s ex-husband Tom, Lowenna Melrose is his new wife Anna and Naeem Hayatt is Kamal, a therapist who may or may not have been having an affair with Megan.

It’s a tangled web they all weave, with Farnworth noting: “All the characters in the play are multi-faceted and complex and it’s not a goodie-baddie story. All the characters are slightly flawed and that makes for interesting, exciting drama.”

Director Banks feels that even audiences familiar with the novel will be surprised by The Girl on the Train on stage. The key plot points are unchanged, but in the book there are three character narratives — namely those of Megan, Anna and Rachel — while on stage Rachel is the focal point.

“In the novel the way that facts are revealed and the sort of drip-drip of that is through three fragmented chronologies,” he explains. “Here it’s more simple — told across six chronological days, but the scenes withhold information from the audience in hopefully a similarly experiential way to how the novel withholds information from the reader. It’s the same story but the presentation is different.”

A veteran of the genre, Banks adds that theatregoers are drawn to thrillers because they tap into our fascination with good and evil and a desire to know whodunnit. The specific hook with The Girl on the Train, he feels, is that it revolves around a anti-heroine. “And it’s fascinating for an audience to follow the journey of a protagonist like that.”

Womack agrees. “There’s something about Rachel’s devil-may-care rebellion that appeals to lots of people. She says what you shouldn’t say, she thinks what you shouldn’t think, she’s a victim of circumstance and you have sympathy for her because of everything she’s been through.”

Rachel is never once offstage during the entire show. “And that terrifies me,” admits Womack. “I don’t always take things in at first and it wasn’t until the middle of rehearsals that it hit me that ‘Oh, it’s basically just one long scene for me.’ I never get to leave the stage and regroup. One scene leads me straight into another and it’s like a dance.”

The actress agrees that the show has jolts and surprises whether or not you’ve read the novel. “We’re replicating the story but there are changes and nuances that are very different. I hope that by the time they leave the theatre people have been shaken about a bit.”

• The Girl on the Train is playing at the Wycombe Swan from Tuesday, September 17, to Saturday, September 21. Ticket prices vary, but at every performance there will be 100 stalls tickets available priced £15. For more information and to book, call 01494 512000 or visit www.wycombeswan.co.uk