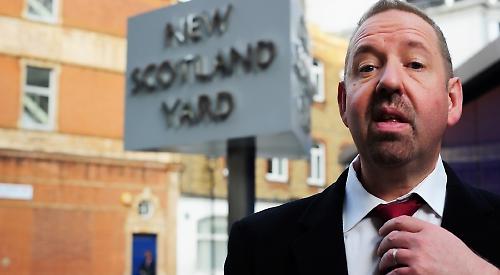 “THE force is strong with this one,” was Darth Vader’s immortal verdict on first encountering Luke Skywalker — but he could just as easily have been talking about cop-turned-comedian Alfie Moore.

The funnyman is bringing his latest stand-up show based on a dramatic real-life incident from his police notebook to the Kenton Theatre next month.

Fair Cop Unleashed sees Alfie relive the thrilling ups and downs of the night a mysterious clown came to town and more than one life ended up in the balance. It was no laughing matter — but this show certainly is.

Alfie spent 18 years on the front line with Humberside Police. But when did he first realise he might have a talent for comedy?

“School, I guess — although ‘talent’ is probably stretching it a bit. More like ‘disruptive influence’.

“Being the class clown has both positive and negative connotations. It shows that you have a sense of humour and aren’t frightened to challenge authority. Unfortunately, it tends to also show a lacking in ability to learn.

“I left school at the age of 15 with no qualifications whatsoever and was later diagnosed as dyslexic. Looking back, I think my humour at school was me desperately trying to fit in and disguise my inability to learn.”

Being able to see the funny side later helped Alfie get through the darker times of being a police officer. One critic has described Fair Cop Unleashed as being “lots of well-crafted jokes and a large dash of police gallows humour”. Does he agree?

“I think a sense of humour is an important pressure release valve for all emergency workers — and I’d guess some other high-pressure roles too. It’s very much a culture of gallows humour, which I have in abundance.

“The people who don’t get the humour have probably never had to zip a 20-stone deceased gentleman into a body bag and then get him into the top floor lift in a high-rise block of flats.

“If you can keep a straight face throughout that job, you’ve done very well! Especially when the lift announces it is overweight and you and a colleague have to decide between you who is stepping out ... we flipped for it and I lost again.”

Not that police work is his only comedy influence. Alfie has happy memories of his childhood growing up on a Sheffield council estate.

“From a young age I can remember sitting watching TV with my dad ‘Big Alf’. We both laughed like drains watching Dave Allen and Les Dawson. They were clever, very original and were doing something refreshingly different to the other mainstream comedians in the Seventies.

“Big Alf was also a fan of Monty Python, whereas I thought their earlier stuff was 90 per cent boring and 10 per cent genius. Maybe I wasn’t old enough to appreciate their TV shows, as later, when the Python films were made, I thought they were classics. As I didn’t start stand-up until my forties my father never saw me perform, which is a great shame.”

Alfie started doing stand-up following a visit to a comedy club in 2007. In addition to numerous appearances at the Edinburgh Fringe and his own tours, he has supported the likes of Russell Kane, Sarah Millican and Milton Jones. Was this something he enjoyed and learnt from? “Working as a warm-up artist on established comedians’ tour shows is the only way that a circuit comedian can get experience of playing bigger rooms, which is invaluable.

“As with anything else, stepping out of your comfort zone can highlight any weaknesses but also give you a great deal of confidence.

“To have the opportunity to tour my own shows has always been my number one goal and now that I do, I feel immensely fortunate.”

Speaking of which, what can the audience look forward to at the Kenton on Friday, October 4?

“It’s a true story about the night a mysterious clown turned up at Grimsby Police Station, ending with more than one life hanging in the balance. I think the story is very gripping and highlights the constant personal danger of being a police officer but also the outrageously funny things that cops experience.

“Although story based, it’s definitely a stand-up show packed with laughter and proving that reality really is funnier than fiction.”

This will not be the first time Alfie has been to the Kenton this year, but the Henley audience impressed him. “It’s a delightful part of the world,” he says. “A few months ago I got a last-minute phone call informing me a comedian was having transport problems and asking could I get to the Kenton Theatre in Henley within the hour to host their regular comedy night? As it happened, I could. The show started 15 minutes late, so the manager bought the entire audience a drink. We all had a wonderful time hosting and I immediately booked my own tour show in. I can’t wait to get back.”

There is one other theatre Alfie would love to perform at.

“Back in 2011, I was in an ITV comedy talent show called Show Me the Funny. I’d only been going a couple of years and did okay but got eliminated just before the final, which was held at the Hammersmith Apollo. Going back there to perform one day is definitely on my to do list.”

Speaking of wishes, is there a fictional police officer he would love as a crewmate?

“Good question! Detective Andy Sipowicz from NYPD Blue. He wasn’t the stereotypical New York cop, more flawed anti-hero, but he was a fantastic detective and such a strong believable character that you couldn’t take your eyes off him. I would love a shift with Sipowicz.”

How does Alfie relax, away from all the driving between gigs and performing?

“I really enjoy sitting in a comfy chair, with a view of my garden, writing material. I find the creative process very therapeutic and it feels nothing like work. If I write a routine then I go for a walk to a lovely little nearby village church. Over the fence there’s a herd of cows and I usually try the new material out on them. Let me tell you I’ve had some tough audiences, but those cows give you nothing!

“The real work comes later with rewrites, edits, rehearsals and travelling. Performing the shows themselves is great fun. They all have a different audience dynamic and things will happen in the moment that will never happen again — that’s why live comedy is so much fun. It’s absolutely true about the cows, by the way!”

Tickets for Alfie Moore’s Fair Cop Unleashed are £19 for adults with concessions £16. The show, which starts at 7.30pm, has a running time of 110 minutes, including an interval, and is recommended for ages 14 and up.