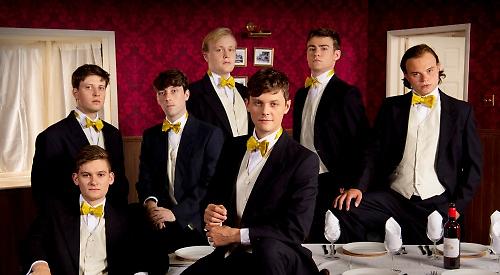 THE Bullingdon Club is the gift that just keeps on giving and never more so than in the timing of Posh at The Oxford Playhouse.

It’s called the Riot Club in this play but it’s a thin disguise for Boris Johnson’s old mates.

And what a treat of double drama to see old Etonian and Bullingdon member Johnson being humiliated in the Commons at the same time as his fictitious counterparts were disgracing themselves on the Playhouse stage.

Posh is an excellently crafted and directed piece which manages to be both brilliant and irritating.

Writer Laura Wade gives us the worst faces of the emotionally stunted, overprivileged and entitled characters she’s created, as they revel in their sense of right and superiority.

They don’t care who they upset or what damage they cause because they have enough money to smooth it over.

They exist to drink to oblivion, destroy and insult each other. Their practices and personal habits are beyond anything a state school-educated reviewer like me can imagine but if any of you have heard of the Biscuit Game then you will know how warped they are.

The strange thing is they’re at Oxford but 80 per cent of them seem quite thick — able to spout Latin, of course, which is so important.

They believe that despite the overwhelming evidence against them, they are born to rule, they are higher beings than the rest and that they can do whatever they like.

This is a disturbing play because although the second act may not have happened, it isn’t that unlikely.

And Wade has a final punch to the ribs after she’s exposed their characters and parallel ethical system: this class closes ranks and always looks after its own.

A disgraced member finds himself working for the intelligence service courtesy of old Riot Club contacts.

This is 2019 and you may think the world doesn’t operate like that any more.

Well, just take a look at that picture of Old Etonian and Oxfordian Jacob Rees-Mogg in full recline on the government front bench earlier this week.