Shock of recognising our inner Fleabag really is all too human 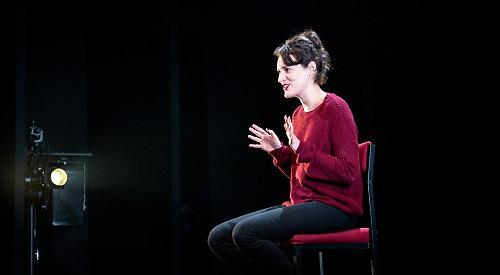 SHE’S been likened to Bridget Jones as she might have been rewritten by Friedrich Nietzsche, and there’s no doubting Phoebe Waller-Bridge’s Fleabag is human, all too human.

That’s why she’s such a fabulous creation — and why the BBC TV series is the undisputed smash-hit comedy of the decade.

Famed for breaking the “fourth wall” and chatting directly to the viewers at home, here the situation was slightly different.

This was a live broadcast from Wyndham’s Theatre of Waller-Bridge’s original one-woman play of the same name, as first performed at Edinburgh in 2013.

With the West End run about to end two nights later, this was one of the last times she would be playing the character — on stage or anywhere else.

And here they all were — the Regal’s lobby was absolutely thronged with people and there was a distinctly theatre-like hum of expectation in the air. Almost like a first night.

The play opens with Fleabag, whose real name we never learn, rushing on to the stage. She is out of breath and sweating.

It turns out she is at the bank for an appointment to discuss a business loan for her guinea pig-themed cafe.

Things quickly go wrong and we are back on familiar ground, with disaster piling on top of disaster.

Harry, her boyfriend, leaves her for good following a late-night indiscretion with Barack Obama and a laptop.

Afterwards, Fleabag tells us: “I sit on the loo and think about all the people I can have sex with now. I’m not obsessed with sex. I just can’t stop thinking about it.”

It’s not so much her interest in sex that gets her into trouble as her honesty about it.

Soon we are introduced to Fleabag’s sister, Claire, who with her high-flying job, husband and stepson at home, seems to have it all together. Yeah, right.

The sisters are attending a feminist lecture called “Women Speak”.

By her own admission, Fleabag is a “bad feminist”. Judged by the strictest of standards, she might even be a terrible human being.

But we don’t care, because she makes us laugh. And because we recognise ourselves in her. And because our doing so is at once slightly shocking and strangely moving.

This is Waller-Bridge’s achievement as a dramatist and, here, as an actor.

She’s already proved she’s not a one-hit wonder or a one-trick pony.

Apparently she’s had some input into the script of the otherwise dreadful-sounding new Bond film.

Good, can’t wait. Keep up the good work, Phoebe, we’re depending on you.

In the meantime, encore screenings of Fleabag the play are in cinemas now.