Sondheim revival bears all the hallmarks of his genius 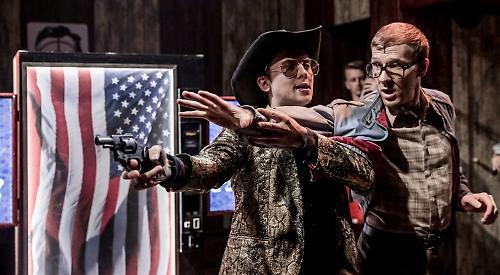 THE name Stephen Sondheim is greatly revered in musical theatre circles, and the veteran composer and lyricist has a host of awards to his name.

It is reported that he is even to have a West End theatre named after him as a gift for his 90th birthday.

His dark comedy revue-style musical Assassins, now running at the Watermill Theatre in Bagnor, certainly bears all the hallmarks of his genius in a sharp and brilliant production presented by a large cast of phenomenally talented actor-musicians directed by Bill Buckhurst.

The book by John Weidman, based on a story by Charles Gilbert Jr, blows the lid off the Pandora’s box of what motivates people to become assassins, and is consequently both deeply disturbing and thought-provoking. However, this is well balanced by the production’s being darkly comedic and very musically satisfying and entertaining.

The historic procession of American assassins and potential assassins is set against a fairground background, where the proprietor (Joey Hickman) sells guns to aspiring murderers at the shooting range.

The slaughter begins with John Wilkes Booth’s assassination of Abraham Lincoln, then sharply ricochets off to John Hinckley’s unsuccessful attempt on the life of Ronald Reagan. And so off we go, on a journey through history that we never would have believed we could enjoy so much.

The Polish anarchist Leon Czolgosz who killed William McKinley in 1901 in the name of the repressed working classes, as flawlessly played by Peter Dukes, drew our sympathy and conjured up uncomfortable parallels with society of today.

We could also easily have found sympathy for the delusional Charles Guiteau, who was responsible for the death of President Garfield in 1881, as — played here superbly by Eddie Elliott — he sang and danced his way to the gallows in a fabulous upbeat Gospel number.

A little comedic light relief came in the persons of potential assassins Sara Jane Moore (Sara Poyzer) and Charles Manson’s crazy girlfriend Lynette “Squeaky” Fromme (Evelyn Hoskins) as they compared notes about Manson and then failed in their attempts to assassinate Ronald Reagan.

Perhaps one of the most frighteningly sinister characters was Samuel Bick, who failed in his attempt to fly a hijacked plane into the White House to kill President Nixon in 1974.

Dressed as a malevolent Santa Claus, Steve Simmonds’ riveting and convincing performance served to highlight the thin veneer that separates “normality” and the capacity to be completely deranged.

But the possible intellectual and ethical challenges of this production are so well offset by its superb music, acting and staging that the one hour and 40 minutes of its duration fly by in an extremely enjoyable flash.

There is no interval and you can agree that it would be sacrilege to interrupt the action.

Recommended for ages 14 and up, Assassins is playing at the Watermill until Saturday, October 26, before transferring to the Nottingham Playhouse. To book, call 01635 46044 or visit www.watermill.org.uk