Last chance to catch Amélie before she heads up West 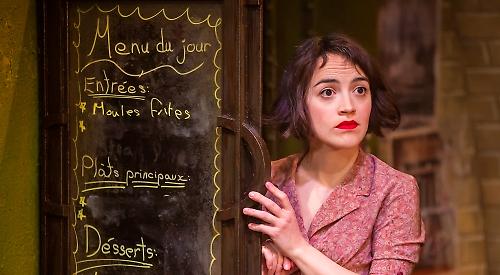 IT has wowed audiences at the Watermill in Bagnor and the New Theatre Oxford — but now there is another chance to catch Amélie the Musical before it transfers to the West End, writes Peter Anderson.

Starring Audrey Brisson, the show is playing at the Hexagon in Reading from tomorrow (Tuesday) until Saturday before opening at The Other Palace in London on November 29.

Adapted from the 2001 French language film that charmed the world, Amélie the Musical is the story of a young woman who lives quietly in the world but loudly in her mind.

She secretly improvises small but extraordinary acts of kindness that bring happiness to those around her. But when a chance at love comes her way, Amélie realises that to find her own contentment she’ll have to risk everything and say what’s in her heart.

Amélie the Musical is directed by Michael Fentiman, who said: “The show was originally created in the beautiful and inspiring Watermill Theatre, with some of the most skilled performers and creatives I have ever had the privilege to work with. Amélie is a show about making connections, the simple acts of kindness that pull people closer, not further apart. In such divisive times, we all need a little piece of Amélie.”

Paying tribute to his lead actress, who will continue in the role during the show’s West End run, Mr Fentiman added: “As soon as I was asked to direct this production, Audrey was the first name I mentioned for the part.

“We have worked together before. Last time she played a hedgehog — obvious casting for Amélie! — in a production of The Lion the Witch and the Wardrobe I directed a few years back. She is an extraordinary performer. A rare thing. A classically trained singer who once toured the world with Cirque de Soleil, a superbly charismatic comic and clown, and a sensitive and intelligent actress.”

What does Audrey herself feel about playing Amélie?

“It is such a fabulous story, and I love the film it’s based on,” she says.

“Amélie is a fascinating character. Her imagination. Her reluctance to give up. She grows up thinking she can’t connect with anyone and that she’ll always be alone, yet she’s got this positivity within her.

“I love her positivity, her perseverance and her way of seeing a situation that’s potentially very dark and then bringing some colours into it. I think that’s something I need to hold on to.”

What has it been like recreating such an iconic film role for the stage?

“It’s the connection,” says Audrey. “You can sit on your sofa and watch the film and you’ll still be able to enjoy the beauty and be moved by it, but when you come to the show you have real people singing for you, looking at you, talking to the audience. We invite you into the story.

“I think it’s great to remind people that we are, as humans, all in this together. No matter how lonely you might feel, you’ve got someone next to you listening to that same story.

“When you’re in an auditorium of people who will all experience the story differently because they have their own journeys, you’ve got a room filled with different interpretations of what it is to be human. I think that’s quite potent and wonderful.”

Evening performances start at 7.30pm and there are matinées at 2.30pm on Wednesday and Saturday.

Joining Audrey on stage is an actor who impressed many people on Strictly Come Dancing in 2016 and has since played roles in many stage musicals.

Danny Mac plays Amélie’s love interest, the quirky Nino Quincampoix. But how would he describe him?

“He’s an extraordinary character — he’s such an introvert. He’s similar to me in so many ways. He’s a man of few words and he’s constantly figuring everything out, but when he asks questions he’s so poetic, so metaphorical. I find him fascinating.”

Danny is someone for whom Strictly has been anything but a curse.

“It was terrifying for many reasons but I got to learn a skill that I hadn’t been able to learn before,” he says.

“My first stage job out of that was On the Town, which I wouldn’t have done in a million years if I hadn’t had those four months intensive training as a dancer. It was something I could invest in whilst also performing to a brand new audience.”

Speaking of which, what does Danny think the public can expect from this show?

“Audiences can expect a beautiful story told in the most magical of ways with a company of some of the most talented people I’ve ever had the pleasure of working with. It’s a sheer joyous experience from beginning to end.”