‘Switched on’ comedian found his USP on his PC 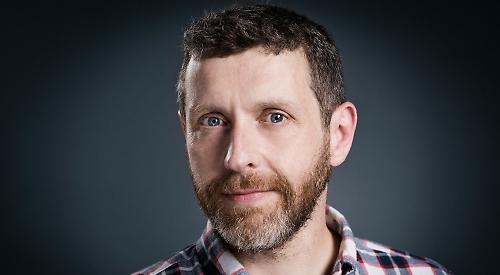 SOME people say others spend too long in front of a phone or computer screen and don’t get out enough.

Well, later this month they can do both with a multimedia evening starring the high priest of PowerPoint comedy, Dave Gorman.

The 48-year-old — who made his name at the turn of the millennium with the book and stage show Are You Dave Gorman? — is bringing his latest live show With Great PowerPoint Comes Great ResponsibilityPoint to the Hexagon theatre in Reading on Wednesday, October 30.

Equipped with a laptop and projector screen, he will guide his audience through more detailed analysis of those parts of life you’ve never stopped to think about before. But can he offer any clues as to what to expect this time around?

“As the title says, more PowerPoint! It is very much a Marmite kind of thing — some people have grown to hate PowerPoint presentations because of things like work training courses. For others, they would complain if I didn’t do them.

“I have been told you are not supposed to have more than 20 slides, so I have about 700. It’s a fun mixture of jokes and information — a serious amount of information.”

There are as many routes into a career in comedy as there are comedians, but for Gorman it was something he wanted to do from a young age.

“When I was a teenager, I was mad on comedy,” he says. “Whereas a lot of my friends were mad on pop groups and going to gigs, I saved my money up and the highlight of my year was spending a week at the Edinburgh Fringe and going to five or six shows a day, either sleeping in the car or camping.”

Having dropped out of university after a year of reading mathematics at Manchester, the young Dave Gorman found himself at something of a loose end.

“I think one thing I was lucky with was that I got into comedy when I was 19, with few cares in the world and no financial pressure to succeed,” he says. “Some people nowadays are coming into comedy in their thirties with a mortgage they need to find the money for.”

So of all the acts he saw up in Edinburgh at a tender age, who inspired him the most?

“Without a doubt the poet and stand-up comedian, John Hegley — in my opinion he is so underrated. The inspiration he gave me was to look for that one thing, that unique selling point that tells you this is a Dave Gorman show and nobody else. All I had to do was find it — and who’d have guessed it would be PowerPoint?” Confirmation that Gorman was on the right track eventually came from one of his distinguished predecessors on the circuit.

“I was performing a show in Harrow and the great comedian and writer Barry Cryer was in the audience. He came up to me at the end and said, ‘Well done, now you have an act nobody is going to steal.’ Acknowledgement I had found my USP.”

Having played Reading many times before, are there any memories of his previous shows that particularly stand out?

“I always do a meet and greet after the show with books on offer and sitting there signing books,” he laughs. “The last thing you want to do is spell the name wrong — is it Claire, Clare or even Clair? John or Jon? Someone passes me a book and says ‘To Ian, please.’ I say ‘one I or two?’ and hear a very sharp intake of breath from the queue. I look up to see he is wearing an eye patch. ‘Two please,’ he replied without a glimmer of annoyance.”

Gorman has appeared on his fair share of TV quiz shows, but not yet Celebrity Mastermind. Is there a reason for that?

“I have been asked and turned it down four or five times — I just could not think of a specialist subject. The problem with pop groups is they can have weird hits only in certain places and there is never a single research source.

“I have a reputation to keep up as I have won on Pointless Celebrities, Celebrity Fifteen to One and The Chase, plus I was a phone a friend on celebrity Who Wants to Be a Millionaire. I got the question right as well.

“Recently, the ideal subject dawned on me — Sid Waddell, the late, great darts commentator from the North East. I have his biography at home, all my research in a single book. He was actually way more than just a darts commentator — he was a television producer and also wrote some children’s television shows for both the BBC and ITV.”

Quiz shows are far from being the only television Gorman does. Monday (October 21) at 10pm sees the first episode of his latest series on the Dave comedy channel, Terms and Conditions Apply.

Still armed with a computer, clicker and checked shirt, Dave will again be bringing his trusty screen along, but each episode will see him joined by three comedy guests as they cast their eye over the latest discoveries, compete in mischievous games and generally attempt to unscramble the baffling morass of non-stop information that surrounds us in the internet age.

Tickets for Dave Gorman’s Hexagon show are £29.50. For more information and to book, visit www.readingarts.com

For a full list of tour dates, visit www.davegorman.com/live