Medical vibe lends itself well to this gender-swap Macbeth 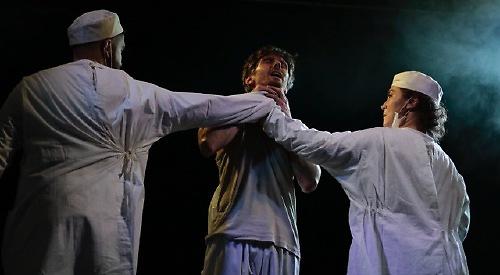 IT feels very fitting to watch Macbeth at a time of year when our thoughts turn towards the spooky and supernatural, so this is canny programming from Reading Between the Lines.

Directed by Hal Chambers, RBL’s production is action-packed and atmospheric.

The raised stage has the audience in the round and protected from the bloodiest scenes by a set of polythene curtains which are drawn across when things get gory.

These curtains give a cinematic undertone to the action, but are also reminiscent of the curtains around a hospital bed when a patient is in distress.

There is a strong medical vibe in this production, as the expected three weird sisters are amalgamated into a single witch (Lizzie Crarer), who circles the stage mesmerisingly, in white scrubs and pushing a hospital trolley.

As the plot progresses, this witch recruits other beings into her band, notably the ghosts of Banquo (Maanuv Thiara) and Duncan (Jordan Whyte).

Macbeth is a woman (Jessica Baglow) and so, in this interpretation, Lady Macbeth is transposed into Lord Macbeth (Oliver Bennett).

Baglow is convincing as a fierce, warrior-like Macbeth and she is also authentic in her tortured reflections as events begin to run away with her — she delivers her soliloquies with passion and credibility.

The director’s intention with casting was to make the audience ask questions about what he saw as a male-dominated play. Thus King Duncan becomes Queen Duncan and Macduff is also played by a woman (Charlotte Wyatt). For me, this stroke of artistic licence was difficult to absorb, not least because Lady Macbeth’s acidic lines become diluted when voiced by a man.

When Lady Macbeth takes control in a traditional production of this play, the audience is unsettled by her strength of character and unconventional behaviour. But when a man delivers the line “Leave all the rest to me”, as in this production, it comes across, I’m afraid, as unremarkable.

Lady Macbeth famously makes a bold and chilling statement that she would dash out the brains of her suckling baby rather than break her word; articulated by the baby’s father, the threat of violence perhaps takes on a different tone.

That aside, this Macbeth is memorably theatrical. The music and sound from Harry Smith and Joe Morris signify unequivocally that chaos has been unleashed.

I particularly enjoyed the banquet scene when the ghost of the murdered Banquo arrives to unsettle Macbeth; throbbing sound effects ratchet up the tension as Macbeth loses her composure.

Well done to the cast and crew for this ambitious and extraordinary production.