Drinks writers have made the move from page to stage show 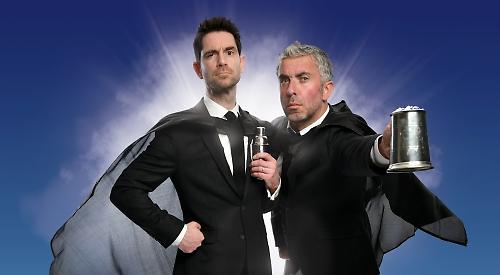 TWO award-winning drinks writers who turned their passion into a comedy show are bringing it to Norden Farm Centre for the Arts in Maidenhead next month, writes Peter Anderson.

Ben McFarland and Tom Sandham met in their twenties while working on a leading pub magazine.

Together they went on to write a book called Thinking Drinkers: The Enlightened Imbiber’s Guide to Alcohol, from which they took their stage name.

Having made their debut at the 2011 Edinburgh Fringe they saw their show “The Thinking Drinker’s Guide to Alcohol” transfer to the Soho Theatre the following year.

Now the Thinking Drinkers are back on the road with a new show, “Heroes of Hooch”, billed as a hilarious and intoxicating look at history’s greatest drinkers.

Audience members are invited to enjoy five free drinks throughout the course of the evening as Ben and Tom reveal how alcohol has inspired pioneering experts, politicians and painters in equal measure — from Plato and Picasso, to Nelson, Napoleon and Norm from Cheers.

The pair still find time to write a drinks column for the Daily Telegraph among other publications, but how did they find making the switch from page to stage?

“Oh, it wasn’t the change from writing that was the issue,” they say. “In fact there has been a flow of information both ways, with some show research appearing in the newspaper and vice versa. The real challenge was going from hiding behind a desk to standing in front of an audience. For example, in this show we take on the roles of cancan dancers.”

What can audiences look forward to, apart from the five free drinks?

“These are fine quality drinks which link in with some of the stories of the great heroes. As well as the Watney’s we have a Shiraz-infused red rum and a cognac where we try and take the audience back to La Belle Époque with Grand Marnier and those cancan dancers we mentioned. We don’t just nip down to the nearest German supermarket chain.”

How do they decide on a new topic for each tour?

“We try and think of a different subject each year, but one that has a reasonable link to drinking. Last year it was pubs and this year it is famous people with a link to drink — hence ‘Heroes of Hooch’. We have, for example, Harry Houdini — who tried to make an escape from a barrel of Tetley beer.”

The Thinking Drinkers play Norden Farm on Friday, December 6. Tickets are £16 and the show is for ages 18 and up. To book, visit www.nordenfarm.org

“Heroes of Hooch” is touring until the New Year. Other venues include the Old Town Hall in High Wycombe, the Hexagon in Reading and Cornerstone Arts Centre in Didcot. For a full list of dates, visit www.
thethinkingdrinkers.com