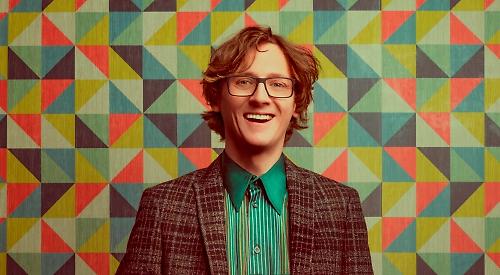 WITH 25 years of stand-up to his name, Ed Byrne must be one of the most well-travelled comedians on the circuit.

It’s a track record that has lately seen him parlay his on-stage success into a variety of notable television appearances.

A regular on Mock the Week and The Graham Norton Show, Ed has recently co-presented Dara and Ed’s Great Big Adventure and its follow-up Dara and Ed’s Road to Mandalay. He also managed not to disgrace himself on Top Gear or while tackling one of the World’s Most Dangerous Roads.

Worldly success is fleeting, however, and as Ed edges out of his mid-forties and into his late forties, the dad-of-two’s latest touring stand-up show If I’m Honest sees him taking a long hard look at himself and trying to decide if he has any traits that are worth passing on to his two sons.

Not that age has withered him in any way — especially now that Ed, a keen hill walker, has figured out how to head off physical ailments before they’ve become a problem.

“You see comics who are my age and older but are still retaining a level of ‘cool’ and drawing a young crowd,” he smiles. “I can’t deny I’m quite envious of that. But there’s also something very satisfying about your audience growing old with you.”

An observational comic by nature, if he could be invisible for a day, where would he go to observe people unnoticed?

“I’m 47 years old,” he laughs. “Being invisible is no longer a fantasy. All I have to do is go to a bar or club where the average age is below 25 and I instantly become invisible.

“I can wander amongst the young folk, observing their behaviour, listening to their conversations, all the while going completely unnoticed like a ghost. It does make it hard to get served at the bar, though.” With all that hard-won experience to his name, how easy does Ed find it to write up things he sees in real life that he might want to use in one of his shows?

“That’s a lot easier than it used to be, thanks to being able to note stuff down on your phone,” he says.

“Often ideas will come to me just as I’m going to sleep and, in order to write them down, I used to have to turn on the light and grab a pen and paper, but now I just have to reach for my phone — which also reduces the risk of waking my wife.

“I remember being at a wedding years ago with my girlfriend and, inspired by a conversation I was having, a joke came to me — so I went up to the bar and asked to borrow a pen and paper. While I was writing the idea down, a woman came up to me and, quite aggressively, demanded to know ‘What are you writing about us?’

“She had recognised me, knew I was a comic and assumed that whatever I was writing down was some barbed comment at the expense of the wedding guests. The worst part was trying to explain the half thought-through joke that I was writing down because it really wasn’t that funny yet.” He pauses. “That wouldn’t happen now — I’d just look like I was sending a text.”

As you may imagine, a quarter of a century at the comedic coalface has equipped Ed with a highly evolved storytelling ability and a silky mastery of his craft. Having occasionally been accused of whimsy, If I’m Honest takes the opposite tack. Gender politics, for example, is something Ed readily engages with.

“I’ll admit that there are things where men get a raw deal,” he says. “We have higher suicide rates, and we tend not to do well in divorces, but representation in action movies is not something we have an issue with.

“It was Mad Max: Fury Road that kicked it all off, even though nobody complained about Ripley in Alien or Sarah Connor in Terminator 2. Of course, social media means this stuff gets broadcast far and wide in an instant, which emboldens people.”

There’s an appetite for this sort of material, but while Ed can pull off the necessary balancing act, he remains wary of doing so.

“I did stuff about Trump and the Pizzagate right-wing conspiracy,” he says, “and a couple of the reviewers said, ‘Oh, I would have liked to have watched a whole show of this.’

“And I think, ‘Well you might have, but the average person who comes to see me would not like to see that.’ I like to make a point or get something off my chest, or perhaps I’m talking about something that’s been on my mind, but the majority of stuff is just to get laughs.”

That’s one gift horse we’d all do well not to look in the mouth.

Ed Byrne plays the Hexagon in Reading next Friday (November 15) and the Wycombe Swan on Saturday, February 29. For more information, visit www.edbyrne.com