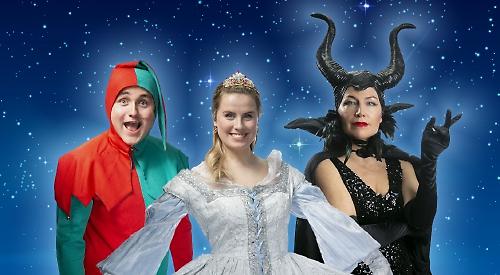 THERE’S nothing like a good old traditional British panto to
get you in the holiday mood.

This year the Kenton Theatre is delighted to bring you the fun and frolics, the energy and dynamism, and the love and romance of Sleeping Beauty.

A spokesman for the New Street venue said: “Once upon a time in a land far, far away, the King and Queen organise a great feast to celebrate the birth of their daughter, Briar Rose. But in their eagerness they forget to invite the sorceress, Maleficent, who arrives mid-feast to wreak her revenge, crying out ‘The King’s daughter shall, in her 18th year, prick herself with a spindle and fall down dead!’ before sweeping out of the room. Fortunately, there is a good fairy who has not yet bestowed her magical gift on the princess and she softens the curse, saying: ‘The Princess will instead fall into a deep sleep, to be awakened only by true love’s kiss.’ Perhaps you know the rest of the story, but we promise you much fun in the telling of it, and many hilarious moments along the way.”

Sleeping Beauty is playing for 24 performances at the Kenton Theatre from Friday, December 13, to Saturday, December 28.

With a total of 5,760 seats on sale, the show is the biggest of the year for the New Street venue — and for Henley as a whole.

As such, the stars of Sleeping Beauty have been invited to switch on the town’s Christmas lights at the Henley Christmas Festival on Friday, November 29.

The Kenton spokesman said: “The Prince will be coming with the children and reindeer from the River & Rowing Museum to meet up with Beauty in the medieval tent in Market Place. The Prince and Beauty have been asked to switch on the Christmas lights. They will be waiting in the tent to meet everyone who would like to come and say hello for hugs and selfies.”

Playing the pair are Jessica Condon as the Prince with Betty Jones as Sleeping Beauty herself.

Before becoming a professional actress, Betty Jones read music at the University of York before going on to train in musical theatre at the Mountview Academy of Theatre Arts in Peckham, graduating in 2017.

Her qualifications are mirrored by those of Jessica, who holds a bachelor’s degree in music (classical voice) and a bachelor of fine arts (music theatre).

Originally from Melbourne, Jessica Condon has moved to London from Australia to pursue a career in musical theatre and is a member of the well-known cabaret trio Girls from Oz. Her role in Sleeping Beauty will mark her panto debut.

Joining them in the cast are Paul Tonkin as the King, Ross Telfer as the Jester, Cole Dunn as the Gargoyle and Mary Stewart as his cruel mistress, Maleficent.

Paul Tonkin’s theatre credits include Ash in Happy Even After (Old Fire Station, Oxford, and tour), Dean in Bottled Up (The Lyric, Hammersmith), George Wilson in Gatsby (Leicester Square Theatre), and Nick in My Previous Self (Southwark Playhouse). Closer to home, he played King Lenny in Sleeping Beauty at Chipping Norton.

Ross Telfer is a Scottish actor who spent most of his childhood growing up in South East Asia and Australia.

Like Betty Jones, he trained in musical theatre at Mountview Academy of Theatre Arts, during which time he performed in a number of shows including Legally Blonde and Jane Eyre. He will soon be appearing on Netflix in fantasy epic The Witcher.

Cole trained at Laine Theatre Arts. His previous panto credits include an ensemble role in Beauty and the Beast and Dandini in Cinderella.

Last but not least, Mary Stewart returns to the Kenton after a seven-year gap, having previously played Cinderella’s wicked stepmother in the theatre’s first self-produced pantomime in 2012.

• Standard tickets for Sleeping Beauty are £22 for adults with children £16 and concessions £20. Family tickets are £69. For more information, including a full list of show times and other prices, call (01491) 575698 or visit www.kentontheatre.co.uk