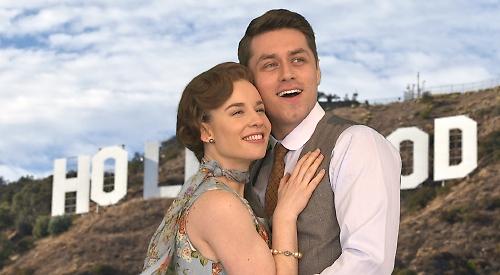 THEY’RE no strangers to the wet stuff at the Mill at Sonning — as anyone who has passed any time in the Waterwheel Bar can happily testify.

But the theatre’s new Christmas production marks the first time in it’s near 40-year history that audiences will have been treated to an actual downpour on stage.

Inspired by the classic 1952 Hollywood musical starring Gene Kelly, Singin’ in the Rain opens tomorrow night (Saturday) for a
10-week run that ends on Saturday, February 8.

Assuming, that is, that it doesn’t end up following in the footsteps of last year’s festive show, Guys and Dolls, which proved so successful that its run was extended by four weeks — taking it up to three months in total.

Taking charge of the 14-strong cast will be director Joseph Pitcher, who will once again be joined by musical director Charlie Ingles.

Together the pair have been responsible for the last three Christmas musicals at the Mill, starting with High Society (2016) and My Fair Lady (2017).

A dancer by training, Joseph normally takes charge of the choreography too, but this year the emphasis on tap has seen Ashley Nottingham, whose recent credits include the UK tour of Spamalot, join the team, with the rain effects being provided by Alasdair Elliott, one of the world’s leading stage water effect technicians.

A thousand litres of water will be pumped on to the stage during every show, with patrons in the front row being issued with “splash macs” to wear.

Set in Hollywood in the waning days of the silent screen era, Singin’ in the Rain centres on romantic lead Don Lockwood, his sidekick Cosmo Brown, aspiring actress Kathy Selden, and Lockwood’s leading lady Lina Lamont, whose less-than-dulcet vocal tones make her an unlikely candidate for stardom in the transition from silent films to “talkies”. A spokesman for the Mill at Sonning said: “Singin’ in the Rain has everything — a brilliant script, show-stopping choreography and a hit-parade score of Hollywood standards including Make ‘Em Laugh, You Are My Lucky Star, Good Mornin’ and, of course, the one that you’ll all be waiting for — Singin’ in the Rain.”

One man who can’t wait for the show to start is Charlie Ingles.

Still only in his early twenties, the Mill’s artistic director Sally Hughes earlier this year called him a “wunderkind”, adding: “He’s just a musical genius at such a young age.”

Reviewing Guys and Dolls last year, the Daily Mail noted that “Charlie Ingles’s arrangements for a five-piece band miraculously retain the scale and joie de vivre of an orchestra”, while The Stage called them “fresh” and “uplifting”.

So what are the secrets of Charlie’s success? Discovering his talent for and love of music at a young age doesn’t seem to have done him any harm.

“It was when my gran bought a piano,” he says. “I often used to go to her house after school. Once she had a piano, I used to sit there and pick out the tunes that we had had at primary school that day.

“My parents then arranged piano lessons and I did all my grades for classical piano — though sticking to the notes written down in front of me was not something I always adhered to. Later on I was in an amateur dramatic group and somehow they preferred me to play the piano for them than appear on stage. But it was one of my tutors at university, who was also an orchestral arranger, who encouraged me to use my tendency to deviate from the printed score.”

With that tendency having served him well in the intervening years, what can audiences for Singin’ in the Rain look forward to from where he’s sitting?

“Something new for our Christmas musicals at the Mill, which we have been doing now for a few years, this will be the first year that we have included tap dancing in the show. One thing we decided was that because the orchestra are ‘remote’ in another part of the Mill and video-linked, we would go for the MGM film sound.

“You need to know your space when you are arranging the music. It is easier in a larger theatre, especially one with a built-in orchestra pit, as they are designed to amplify the sound. But Joseph and I have worked together on all the musicals we’ve done at the Mill, and we can spend a couple of days working out what we want to achieve. Then I work out the instruments and arrangements to get that sound.

“With our going for the film sound, this means we enjoy the lovely harmonies rather than the large sound that would be needed to fill a major theatre.”

With all his knowledge of musical theatre, what does Charlie listen to in the car on his way home from rehearsing and performing?

“I listen to modern pop music. If you are arranging a musical for a modern audience, you have to include influences from the style that is currently in vogue. Not overtly sampling, more things like chord structures and sounds so that when a modern audience hear it they can relate to it and perhaps enjoy it more than they thought they would.” If he could borrow the Tardis and do his job in a different era, which would he choose?

“Without question I would love to have worked in the Forties and Fifties at the height of the success of the MGM musicals. Though undoubtedly all the major songs were written by Rogers and Hammerstein, I am also sure that some of the incidental music covering entrances and exits was written by the rehearsal pianist and the choreographer working together on the fly. Even with the Andrew Lloyd-Webber musical Cats, the words for Memory were written by the producer Trevor Nunn because they needed something there and then.”

With no two days the same in the world of showbiz, are there any particular musicals on Charlie’s professional wish list?

Tickets for Singin’ in the Rain up to and including December 23 include a Christmas buffet, and from Boxing Day onwards a two-course meal in the restaurant before the show. There is also a New Year’s Eve gala performance with added food and entertainment.