Storybook bear is the star of the show 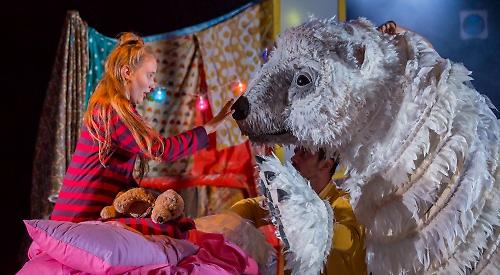 IF you need a little cosy, heartwarming magic to see you through the winter months, then Pins and Needles Productions’ enchanting adaptation of The Bear by Raymond Briggs has got all the tricks.

Bursting on to the stage with high energy, song and dance, fresh-faced Tilly and her parents brought us on an adventure with a mysterious polar bear who required some careful handling.

The colourful, quirky set was cleverly reconfigured into different rooms as the story changed, so a bedroom became a kitchen, a bathroom, even outdoor space. The musical accompaniment throughout struck just the right notes, with little comedic moments and dashes of wistfulness.

Tilly and her mum and dad created a warm, fun, happy place with little routines and comedy antics.

However, the star of the show was the graceful, balletic, majestic bear, masterfully animated by the three players.

With marvellous comic moments, revolving around animal ablutions and erratic behaviours, they conjured up a highly believable creature with adept puppeteering. From its delicately placed feet to the expression on the bear’s face, you could truly suspend your disbelief, as the bear padded about, rolled over, climbed and generally caused chaos.

With bubbles, glitter, light and sparkle, everything about this production was charming. My two boys were rapt.