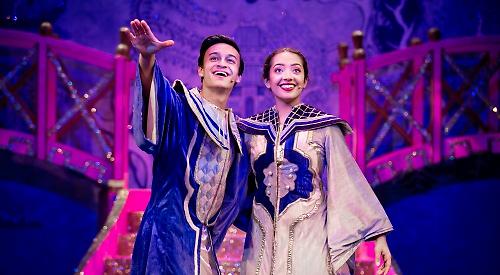 MERGING the timeless with the topical, the Theatre Royal Windsor’s panto saw us treated once more to a jam-packed evening of entertainment, courtesy of Stephen Blakeley, Kevin “10th Anniversary” Cruise and their comedy cohort in Aladdin.

From the moment the effortlessly evil Abanazar (Paul Nicholas) and his virtual assistant Allegra strode in, to the upbeat tunes, slick dance routines, sumptuous costumes and elaborate sets, this was a festive feast of yin and yang, bringing in both the dark side and the dazzling.

Having amassed a loyal local fanbase, plus others coming from much further afield, Widow Twankey (Blakeley) and Wishee-Washee (Cruise) brought out some great gags, skits, slapstick, a wonderful Dirty Dancing homage that has to be seen to be believed, and a highly satisfying vent at a service centre calls hotline.

Joined by Joe Thompson-Oubari as an energetic Aladdin and Rhiannon Bacchus as Princess Jasmine, we also enjoyed the dulcet tones of Marti Webb and the spot on one-liners of Basil Brush.

There were spooky giant mummies, clever magic carpets, an elephant and a delightful comedy camel.

With the festive classic “The Twelve Days of Christmas” came flying loo rolls, supersoakers, a whirlwind of activity and of course the “bra that could only hold three”.

We were highly entertained, as verified by the hoots of laughter.

From catchy Latin numbers, via Agadoo and “The Birdie Song” (good for tweets), the audience were up on their feet, singing, dancing, joining in and generally having a ball.