Funnyman’s all fired up after oven glove fiasco 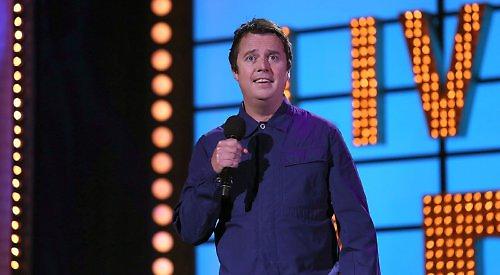 PAUL McCaffrey can still remember the first successful comedy routine he wrote, even though it was more than a decade ago.

“It was about cash machines and how frustrating it was when you were queuing to use one,” he says.

It went down so well at his early gigs that he ended up doing it a few years later during an appearance on Russell Howard’s Good News.

The routine is typical of McCaffrey’s instantly accessible approach to comedy. He is a classic observational storyteller, talking about the irritations in his life in a way that everyone can relate to.

He is not a “high status” comedian. In fact, he is more of a “lemon”, which also happens to be the title of his latest show.

“It’s what I’ve been called quite a few times in my life — I’m just a bit of a lemon, an idiot,” chuckles the cheerful 45-year-old.

He offers a recent example of why he might have earned this nickname.

“I was sat down eating beans on toast and I could see flames. I thought that one of my neighbours was having a bonfire, so I watched it for three minutes and then realised I’d left the hob on and put the oven glove on it. I’d just spent the last three minutes watching the reflection of my burning oven glove in the kitchen window.”

Professionally, McCaffrey is on something of a roll. In December last year he appeared on BBC Two’s Live at the Apollo — a show he’d always wanted to do.

“I got a phone call out of the blue,” he says. “It was surreal. I’ve had so much time to imagine doing it and then the next thing you’re at the Apollo, standing at the back of the stage, you hear your name, the screen goes up and this is it.”

It was not his first time at the Apollo, however.

“Fortunately for me, I had already played that room. I did it about seven times supporting Kevin Bridges and twice with Sean Lock. I was still nervous — I was really worried my hand was going to shake, and then as soon as I got out there a sudden calmness just came over me.”

It might have taken McCaffrey a while to get his big break, but looking back maybe he was destined for a comedy career. He grew up in leafy Winchester and confesses that at Kings’ School — a comprehensive also attended by Jack Dee — he was the class clown.

“My mum threw all my school reports away,” he laughs. “I think she was ashamed of them. I can remember my head of year’s comments at the bottom of one of them. He just wrote in capital letters ‘I DESPAIR’. I was a very naughty kid.”

After leaving school, McCaffrey had various jobs — running a bar in north London, working in call centres and selling clothes in Next, but he tended to get the sack for mucking about.

Eventually he decided to do a drama course and then at the age of 31 decided to try stand-up. It didn’t hurt that he had always been a huge comedy fan growing up.

“I remember my dad letting me stay up to watch The Young Ones. And then there was The Office. I think Ricky Gervais inspired a generation of comedians. He’s like the Oasis of comedy.” McCaffrey cites Jill Edwards, who runs a famous comedy course in Brighton and taught greats including Romesh Ranganathan, as his biggest influence. But supporting major acts such as Bridges and Lock has also been essential.

“It’s like training with the national team. To watch Kevin or Sean up close and see the work ethic, stagecraft — I learnt a lot by osmosis. I’d just watch them every night on tour.”

When he toured with Kevin Bridges there was one particular occasion when he really realised how big some venues are.

“I think I did five nights at the 3Arena in Dublin with Kevin and then afterwards we had the day off and went to watch U2 there. And I’m like, ‘I’m glad we’ve done it this way round — I don’t want to watch U2 and then think I’ve got to go up there tomorrow.’ ”

It is no surprise that McCaffrey went to a rock gig on a rare night off. He is massive music fan and on tour he spends his days, when not playing golf, rummaging through the racks in secondhand record stores.

“I do stuff on stage about being in my forties but feeling like I’m 18. I’m the oldest raver in town, but I think people of a certain age can relate to that.”

Life on the road has helped him to master the skills to conquer any crowd.

“I’m there to entertain and provide a bit of escapism. It’s a sales job, ultimately. Comedy is the most results-driven thing I’ve ever done. You can’t coast. I gig five or six nights a week and you can’t just turn up and phone it in.”

Forget queuing at that cash machine, comedy fans should be queuing for Paul McCaffrey.

• Paul McCaffrey’s “Lemon” tour starts in Aldershot on February 6. He plays the Just the Tonic comedy club in Friar Street, Reading, on Thursday, March 5. For more information — including a full list of tour dates — and to book, visit www.paulmccaffrey.com