‘I’m having my cake and eating it with Boris role’ 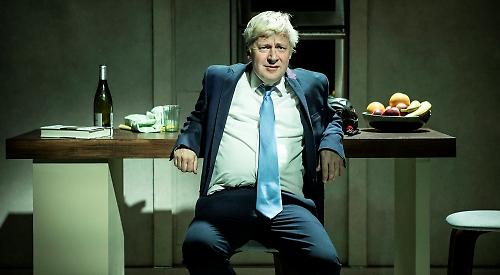 “MY chances of being PM are about as good as the chances of finding Elvis on Mars, or my being reincarnated as an olive.”

So said Boris Johnson some years back, while he was still the MP for Henley and yet to become Mayor of London, much less Prime Minister.

Everyone now knows what happened last Thursday evening, when he led the Conservatives to victory in the general election, thereby reshaping the landscape of British politics for at least the next four years.

But for those devoutly wishing things had turned out differently, a new play coming to the Theatre Royal Windsor in February offers up an intriguing “What if?”

The Last Temptation of Boris Johnson by Jonathan Maitland is a humorous and fantastical tale of politics past and future in two acts.

A spokesman for the production, which enjoyed a sold-out run at the Park Theatre in London earlier this year, said: “It was the dinner that changed history — the night in February 2016 when Boris Johnson decided to vote ‘leave’.

“Fast forward to post-Brexit Britain, 2029. Boris, no longer in power — for reasons that may be fact and/or fiction at time of the performance — roams the political wilderness. But unexpected events see him back in the spotlight and with a chance to ‘make Britain great again’.

“This play addresses the big questions: What will Britain look like in 10 years’ time? Is chlorinated chicken really bad for you? And what is going on inside the head of the most divisive and controversial politician of our time?”

As for the actor tasked with bringing to life the man whose policy on cake is famously “pro having it and pro eating it”, Will Barton has the advantage of having played Boris before, most prominently in the 2017 BBC Two drama-documentary Theresa v Boris: How May Became PM.

With such a variety of work to his name, how does Will’s latest stint as Boris compare so far?

“It’s a great night out,” he says of Maitland’s play. “Great fun and it doesn’t lecture. Interestingly, I had two friends come to see the show on the same night at Park Theatre. One had his People’s Vote badge on and had been on a march that day, the other was a big Nigel Farage fan. They both loved it.

“It is something for both leavers and remainers. But it is also a cautionary tale that reminds us to be careful what we wish for. We are not sure that Boris got where he has at the time he wanted to be there — I’m sure he would rather be PM when there was no Brexit — but that’s the way of politics.”

Would he describe the play as an antidote to the still-unfolding saga of Brexit? “It’s really good fun, a bit ‘out there’ and very funny. So yes, it certainly lightens up the whole sorry mess. I can’t say too much or it will be a spoiler, but it’s interesting to wonder what Britain might look like in 10 years’ time and to guess at what Boris might be up to.”

Not that the play is in any way a one-man show. Playing alongside will are Bill Champion as Michael Gove and Winston Churchill, Emma Davies as Margaret Thatcher, Sarah Vine and the Chief Whip, Claire Lichie as Marina Wheeler and Boris’s Girlfriend, and Tim Wallers as Evgeny Lebedev, Tony Blair and Huw Edwards.

The Last Temptation of Boris Johnson certainly sounds as if it will be an enjoyable piece to perform, but is there any truth to the rumour that Will may have new lines to learn for every performance?

In keeping with the fast-moving nature of contemporary politics, the producers have pledged that the script will be updated to reflect unfolding events. On a nightly basis, if necessary.

“It was a challenge when we did the play at the Park Theatre,” says Will. “I was juggling learning new lines with looking after my daughter and actually doing the show, but it works really well and I’m more relaxed about it this time.”

On that note, how has he gone about transforming himself into the man popularly known as BoJo?

“With all characters you have to find something that you like about them,” he says. “There is almost always something that chimes with you, so with Boris I began with the fact that we both don’t always think before we speak.

“Neither of us is particularly politically correct and we are chaotic and untidy — quick-witted but not intellectual. He doesn’t grasp detail particularly well and I don’t think I do.

“I work from the outside in. His eyes are very important to me. He tends to look up in a specific way and if I do that somehow that helps me to channel him.

“He also walks like an ungainly Mike Tyson, so I watched a lot of footage of him walking. But the lines are there and so it’s just a case of ‘getting’ him and trying not to impose. I do seem to be able to tap into him for some reason.”

Some actors might baulk at playing such a provocative character — especially one who is not only still alive but is in such a prominent position of power — but Will has no such anxieties.

“He is a very contentious character — the loveable buffoon with a darker side who says what comes into his head half the time, but I was delighted to be asked to play him. I’m usually a character actor who doesn’t play the lead, so this really is a great opportunity.”

During the London run of Maitland’s play at the Park Theatre earlier this year, Boris’s sister Rachel Johnson came to see the show incognito and was suitably impressed by Will’s performance.

“She was raving about it and thought it was absolutely hilarious, so I must have been doing something right.”

Surprisingly, perhaps, Will says he won’t be donning a wig for the play. “I dye my hair and it makes a big difference. I’m not sure why, but it does.”

• The Last Temptation of Boris Johnson is playing at the Theatre Royal Windsor from Monday, February 10, to Saturday, February 15, as part of a UK tour running from January to March. To book, visit the show online at www.thelast temptationofborisjohnson.co.uk