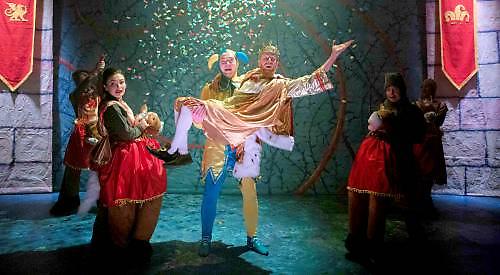 EXCITEMENT was in the air as children and adults gathered for Henley’s pantomime, Sleeping Beauty, at the Kenton Theatre.

There were flashing rainbow wands and swords before the Saturday matinee performance even started. And what better way to get into the Christmas spirit with a bit of pantomime silliness?

Written and directed by Heather Simpkin, Sleeping Beauty was packed full of jokes for adults and children alike — and even a joke about Brexit, calling it the Great British Break Off, didn’t dampen the atmosphere.

With an impressive cast, we were taken through the well-known tale of Sleeping Beauty, but this was modern and fresh, with acronyms galore — there were BFFs and definitely lots of LOLs.

Narrating the story was the Jester, played brilliantly by Ross Telfer, who bridged the gaps between scenes with true wit and was definitely an audience favourite.

Unlike Maleficent, played by Mary Stewart, who got lots of boos. She was suitably evil in a black sequinned dress and shining horns.

Arriving on stage with her gargoyle, Number One, played by Cole Dunn, smoke whirled into the audience, lights flashed and characters gasped.

The children loved it, squealing with anger, as she cursed baby Briar Rose to become “Sleeping Beauty”.

Her evil character did not disappoint and at the end, when she turned into a dragon, the staging was impressive.

Even nasty characters can make jokes and she threatened the Henley crowd that booing her would result in losing our Waitrose.

“No more quinoa, or turmeric lattes,” she cackled, saying instead that she hoped we were good at defrosting because we would be facing an “Iceland Christmas”.

However, as Heather Simpkin wrote in her programme notes, “being silly is a very serious business”. And how true this is.

Although the cast fell about the stage, made silly jokes, laughed and even climbed into the audience looking for spinning wheels, the production was sleek and professional.

With only six cast members, they did an excellent job of changing characters (and many costumes!), keeping up the high energy throughout, barely getting a break off stage.

All the cast members were excellent and deserved real praise. The staging was also cleverly devised, with a castle backdrop and screens which came down to reveal the woods or the thorns.

At one point, as Prince Gorgeous languished in Maleficent’s prison, the stage was dark and a skeleton dangled from a rock at the front. It was imaginative and atmospheric.

Along with smoke, bright lights and glitter exploded on to the stage and, with excited cries from the young audience, there were even bubbles.

Modern as it may have been, using soundtracks from recent films and TV shows — including Trolls, The Greatest Showman, Mission: Impossible, a Frozen teaser and even Peppa Pig — it didn’t lack in pantomime tradition, and the audience loved shouting out “Oh no he’s not” and “Oh yes he is” at various intervals.

As King Droopy Drawers, played by Paul Tonkin, looked for Maleficent’s gargoyle, the audience took great pleasure in saying “He’s behind you!”

Prince Gorgeous, played by Jessica Condon, satisfied the cross-dressing element of pantomime — and with a twist, because he is from a land far, far away (the prince came from Australia).

In a tender scene, Betty Jones, playing Sleeping Beauty, enthralled the audience with her powerful voice as she and Prince Gorgeous sang A Million Dreams from The Greatest Showman, upon meeting.

It demonstrated that the cast could be as silly as you like but they were also skilled and this scene, along with a slow-motion sword fight, made for great theatre.

Saturday’s performance was good family fun, and even when the Jester declared his hatred for Mr Tumble (shock horror!) the audience laughed and shouted and clapped and cheered.

At the end, as children were invited up on to the stage, Lawrence, aged eight, said his favourite song was A Million Dreams, and that summed up the afternoon because it was everything you could dream of from a local pantomime.

It was magical, modern and even Maleficent couldn’t dampen the festive cheer.