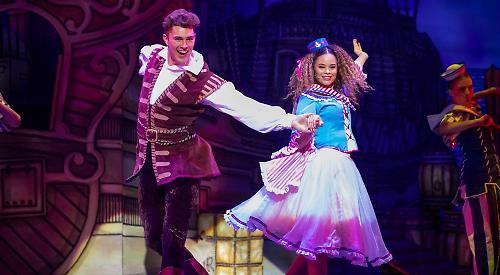 FLASHING light-wands, mini tubs of ice cream and of course, a terrifyingly giant mechanical shark were, for me, the things that made this stand out from the rest.

Yes. You read me right.

The mighty Jaws even eclipsed headliner Curtis Pritchard in my fond memories of this panto and took the entire audience by surprise — prompting screams and cheers as it opened its mouth to reveal a swallowed Idle Jack (Adam C Booth).

Although the shark stole the show, Curtis Pritchard, the brother of Strictly’s AJ Pritchard, showed that dancing does run in the family.

Curtis as Dick Whittington displays just how good a dancer he really is, dazzling the audience and wearing suede leggings all the while. The dance numbers, performed by the Jackie Palmer Stage School, main cast members and the six-person ensemble, were brilliant, but basic.

A few lifts, spins and shimmies to get the audience to come alive before the spotlight was on Curtis, dancing his way into our hearts, proving himself to be the talented dancer we’d seen strutting his stuff on Dancing with the Stars.

As always, a good traditional panto will have its bumps and mistakes — after all, in the spirit of panto that just adds to the fun.

While panto is serious business it is also seriously silly. If a panto was perfect, we wouldn’t get half as much heart. Dick Whittington gave us some ridiculously wonderful slip-ups — two misplaced balloon breasts, an early curtain call leaving Idle Jack on the opposite side of the scene, and some deliberately delightful tongue-twisting faux pas.

In a pantomime where characters speak in rhyme, song and various cat noises, Dick Whittington really was a sight to see for people of all ages.

From ludicrously long-running innuendos based on supermarket foods to the classic Mr Who, Mr What, and Mr I Don’t Know routine based on misunderstanding.

What stood out for me the most was the gorgeous costume design, with each member of the cast dressed in fantastic and creative flair.

Not to say that the Dame (Thomas Howes) still wasn’t the star of the wardrobe fit. Being by far the most colourful and extravagant while still keeping his nonchalant but sassy attitude.