Panto organisers really don’t want to put it ‘behind them’ 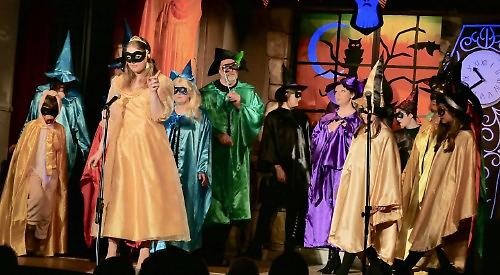 THERE will be no Woodcote panto in January, it has been announced.

A spokesman for the Woodcote Amateur Dramatic Society said the decision had been made due to a shortage of people getting involved.

He said: “WADS are sad to announce that there will be no pantomime this year.

“This was an extremely hard decision for us to make, but due to lower membership numbers and no experienced members available to manage the pantomime production, we are unable to perform our traditional pantomime this coming January.

“A pantomime production is a huge undertaking and we tried to find an alternative but in the end there were simply not enough people to make it happen.

“Like a number of groups in our village we have over the years retained a sound membership base but many of our longer-serving members are now older and wish to participate in a more low key way.

“We do not have people willing to take on the responsibility of running the group and/or productions and we simply need new members of all ages to keep the society going.

“The society has been running for over 50 years and the panto in Woodcote has been an annual event enjoyed by people of all ages both in the village and far beyond.

“Without new members the society will be unable to continue, which will be very sad indeed.

“We would love some new members, so if you are interested in joining us in 2020 please contact us through our Facebook page — Woodcote Amateur Dramatic Society — or contact our chairman Terry Sopp by email at chair@
woodcotedrama.co.uk

“We would really like to put on a spring production, so we invite all interested people to a meeting on Thursday, January 23, at the village hall at 7.30pm. We need people of all ages and no previous experience is necessary.”

For more information, visit the group’s website at www.woodcotedrama.co.uk

However, the good news for panto fans is that a number of locally based groups are pressing ahead with their traditional seasonal shows next month.

From January 16 to 18, the Twyford and Ruscombe Theatre Group is staging a production of Rudyard Kipling’s The Jungle Book, adapted by Stuart Paterson, at Loddon Hall.

A spokesman said: “There will be tons of comedy, music and dance in this fun family show.”

Performances start at 7.45pm on the Thursday and Friday and 2pm and 7pm on the Saturday.

Tickets are £10 or £9, depending on proximity to the stage. For more information and to book, visit www.ticketsource.co.uk/
twyrusdrama

At the Corn Exchange in Wallingford, the Sinodun Players are putting on their 72nd annual pantomime.

Robin Hood and Babes in the Wood by Alan P Frayn runs from Friday, January 17, to Saturday, February 1.

A Sinodun Players spokesman said: “This traditional tale of bravery and intrigue set deep in the Forest of Sherwood in mediaeval middle-England tells the story in song, dance, poetry and prose.

“Once again, the society is particularly pleased to welcome some 25 members of the Sinodun Players’ junior branch, Encore, who join forces with as many senior players to deliver the usual mix of nonsense and laughter, with perhaps the odd surprise lurking deep in the woods. Don’t miss it.”

Tickets are £12 on Tuesdays, Wednesdays and Thursdays and £15 on Fridays and Saturdays, with children £8 for all performances.

Directed by Linda Daman, Anastasia the Pantomime is playing from January 22 to 26 at the Woodclyffe Hall in the High Street.

A spokesman said: “Anastasia follows the story of the lost Russian princess — one of the greatest mysteries of the 20th century. Against the background of the Russian Revolution our plot combines high drama with all the usual over the top pantomime characters who muddle their way through to a successful conclusion. Don’t miss this feast of entertainment, singing, dancing and silliness.”

Evening performances take place at 8pm on the Wednesday, Thursday and Friday. There are three shows on the Saturday at 1pm, 4pm and 8pm, followed by a Sunday matinée at 1pm.

The Shiplake and Dunsden Dramatic Organisation, aka SHADDO, are also getting in on the panto fun.

Aladdin by Ben Crocker is playing at Shiplake Memorial Hall from January 23 to 25.

Tickets will be on sale from Thursday (January 2) from outlets including Shiplake Corner Shop and Binfield Heath Post Office.