Children’s theatre are ‘Pussing’ the boat out 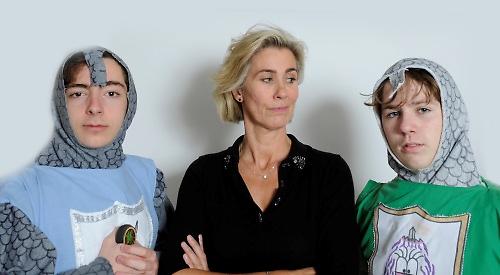 THE film version of Andrew Lloyd Webber’s musical Cats may have garnered some of the most mixed reviews ever dished out, but the director of Henley’s second panto of the festive season is still feline fine about putting on Puss in Boots at the Kenton Theatre next week.

But now an even more landmark anniversary looms — in the form of the group’s 50th annual Christmas panto at the Kenton Theatre.

“That was 1969 that it started,” says Muffin, who was just three years old when her grandmother Flavia Pickworth set the group up.

“Fifty years of pantomime — it’s quite a big thing. And here I am assessing a 50-year-old tradition. It does make me feel a bit tearful at times, to tell you the truth.”

Tearful or otherwise, Kenton audiences can be confident that when the curtain goes up, Muffin and her young charges will be 100 per cent focused on ensuring everyone has a good time.

The show opens with a preview performance at 1pm on Monday (December 30), for which all seats are £8. Another performance follows at 6pm the same day. There are then two performances on Tuesday, at 11am and 3pm, one next Friday at 6pm, and two next Saturday, at 1pm and 6pm.

When I caught up with Muffin early last week, I was surprised to learn that the rehearsals for Puss in Boots were all done and dusted.

“Yes, we have finished rehearsing at this stage because now the kids will finish school,” she said. “So we don’t meet again until we get to the theatre for the dress rehearsal on December 29, which is just the day before we start.”

Keen to keep up with the times as ever, Muffin has tweaked this year’s Puss in Boots script to reflect contemporary mores.

The story follows principal girl Jesse, who inherits a talking cat and sets out to win a title and her fortune from the flatulent Giant Trump in a bid to secure the love of the feckless Prince Georgeous.

Along the way we encounter the Monty Pythonesque Knights of the Rectangular Table, the appropriately modern Gerdame Greer, and some hapless peasants.

“I tried to do a bit of gender work on it,” says Muffin. “Because normally in Puss in Boots it’s a principal boy who is the lead and I turned it into a principal girl. So we have a female there. And instead of the king we have a queen.

“Normally there’s the notion of the principal girl being, you know, rather pathetic as a princess, so we’ve actually got a boy in that role as the prince, who is just incredibly vain and self-obsessed and not able to do anything without the help of this much more strong and independent girl.

“Well, you know, you’ve got to try and be relevant, haven’t you? And I just thought that with all this hashtag #timesup it was quite a good idea, really.”

Back in January 2018, the group’s production of Cinderella featured the character Baron Boris.

Henley’s former MP may have been written out of the script this time around, but two of his political opponents get walk-on parts.

“We have no Boris,” admits Muffin. “We have a minor appearance from Jeremy Corbyn and Diane Abbott, but they’re just a small part in scene one. And of course it’s very hard to be political or do any political plays because it’s been such a volatile time in politics.”

Is Diane Abbott’s character going to have two left feet, as per the photograph of her taken on polling day, by any chance?

“We can add that now, can’t we?” laughs Muffin. “That was very funny. Well, she’s coming along with her calculator because that was always one of the things I found the funniest, when she couldn’t do all that adding up for whatever it was.”

Maybe the learned Gerdame Greer could give her a few pointers?

“Oh, Gerdame Greer!” exclaims Muffin. “She’s quite an interesting character because this show, Puss in Boots, doesn’t have the traditional dame, so we haven’t got that flamboyance in the panto.

“She is quite a modest dame, in that she’s going to be dressed in fairly normal costume — not the big wig and everything.

“And I thought it would be quite funny, again on this topic of gender, I though it was quite clever to have Gerdame Greer, because of course she wrote The Female Eunuch and was quite ahead of her time, wasn’t she, in pushing female things? So we’ve just got a few what I think are relevant jokes with her character.”

On a quest to inject even more humour into proceedings are the Knights of the Rectangular Table.

“They’re very Monty Pythonesque and they’re actually the most fun,” says Muffin. “They’re possibly one of the harder parts to play because they have to interact with each other so much more. And with children if you’re a solitary character, as it were, you can just get on and do your thing. But when you’re working in a group and a little clique, like these four knights are, they really have to lean on each other a lot more for their gags.

“It actually pushes their acting a little bit more, playing the knights. But as I have said to them, it takes a little bit more effort but you’re lucky because your reward is even greater.”

As in previous years, the Henley Children’s Theatre panto will feature not one but two casts, which take it in turns to put on the show.

“It’s about 50 children in each group,” says Muffin. “Two casts to share all the performances. There’s not an ‘A’ cast and a ‘B’ cast, they’re both evenly split, so that’s nice.

“Ticket sales are doing quite well. There are some left to sell for some performances but others are pretty much sold out already. I think we’ve got a couple of sell-outs but it’s always nice to have a full audience.”

With its various humorous and cultural references, Puss in Boots is firmly in the panto tradition of providing something to appeal to people of all ages.

“I think with all our scripts the aim with them always is to be entertaining for the adults,” says Muffin. “Because, you know, they sit through so many dreary school plays and ballet displays and things like that. So I think it’s really nice that the grown-ups can come and have some proper entertainment. But at the same time balance it so that it’s clean and it’s funny and it’s also entertaining for children.

“I have friends that say, ‘Oh, I don’t want to come and see the pantomime because our children aren’t in it any more.’ Well, that’s not the point. The point is it’s a funny script and it’s entertaining on its own. So that’s always what I’m aiming for.”

• Tickets for Puss in Boots are priced £14 for adults and £9 for children. For more information and to book, call the Kenton Theatre’s box office on (01491) 575698 or visit www.kentontheatre.co.uk