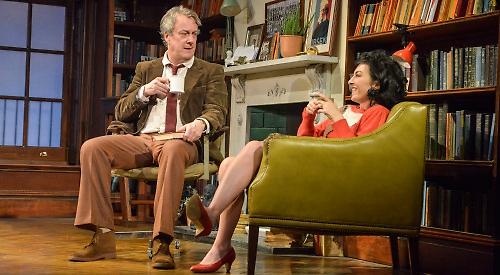 A NEW production of Willy Russell’s Educating Rita that is touring the UK to celebrate the award-winning play’s 40th anniversary is coming to the Oxford Playhouse next month.

Starring Stephen Tompkinson as Frank and Jessica Johnson as Rita, the show visits the Beaumont Street venue from Tuesday, February 4, to Saturday, February 8.

An Oxford Playhouse spokesman said: “Educating Rita tells the story of married hairdresser, Rita, who enrols on an Open University course to expand her horizons, and her encounters with university tutor Frank.

“Frank is a frustrated poet, brilliant academic and dedicated drinker, who is less than enthusiastic about teaching Rita. However, Frank soon finds that his passion for literature is reignited by Rita, whose technical ability for the subject is limited by her lack of education, but whose enthusiasm Frank finds refreshing. The two soon realise how much they have to learn from each other.”

The play was commissioned by the Royal Shakespeare Company and played at the Warehouse Theatre in London in 1980, starring Julie Walters and Mark Kingston.

Tickets for Educating Rita at the Oxford Playhouse start at £10. To book, call 01865 305305 or visit www.oxfordplayhouse.com