Radio 4 comic’s looking on the bright side of life 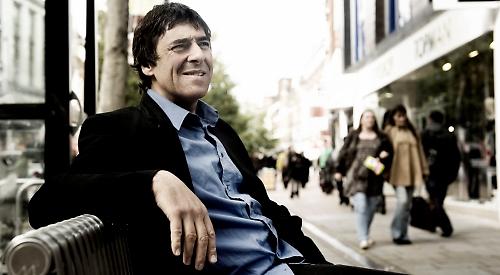 MARK Steel is remarkably chipper when we meet to talk about his new show, even though it’s about a miserable period in his life when Donald Trump won the White House, Nigel Farage seemed to be running Britain, and to cheer him up his wife decided to leave him.

But as the show’s title Every Little Thing’s Gonna Be Alright suggests, the comic isn’t a man to be defeated by what life throws at him on either a personal or political level.

Our conversation is punctuated by laughter, and he talks about his optimism for the future.

“I’ve got loads of burning issues to talk about on stage, but the first thing you start with is, what are the things I think are funny?

“There’s great comedy in things not turning out as you expect. For example, regardless of your politics, you have to be amused that someone so magnificently confident calls an unnecessary election and mucks its up.

“Theresa May couldn’t even make a speech at her own conference without spluttering like a really useless kid in a Nativity play. And they [the Conservative government] don’t know what they’re doing from one day to the next. That’s funny, isn’t it?”

The show also tell the story of his wife of 11 years divorcing him. They underwent “mediation” to divide their financial assets and Mark vents his spleen.

“The way that marriage, or rather divorce, is organised in this country is mad. You’re better off under some sort of Sharia system.” He immediately hoots with laughter at the thought.

Some of his wife’s grounds for divorce lend themselves to comedy: he never cut the privet hedge (not a euphemism); he hadn’t trained the dog; he went on tour (he is a comedian after all); and he is obsessed with sport. So, is he?

“Guilty as charged,” Mark admits. “There was one night I said ‘I’m coming up to bed in a minute’ but then realised ‘Ooh, the fencing is on.’”

He deadpans in his defence: “It wasn’t just any old tournament, it was a regional final — Hungary versus Italy.” Is everything in his life potentially material for a show?

“No, that makes it sound mercenary. But everything in life has a funny side to it. It doesn’t cheer you up or make you laugh, but you know it’ll make an audience laugh because they recognise the truth of it.”

The show is not about him putting his side of things, post-separation.

“That would be unfair. It’s about the process of what happens when a marriage goes wrong. It seemed idyllic, our suburban life living just outside Brighton, and then this happened — someone’s furious with you and everything falls apart.”

That said, he melds the personal and the political in the show.

“In mediation, everything is brought down to the cost of things,” he says. “It encourages people to be unpleasant and greedy, and it struck me that it’s the same philosophy that’s driven the world over the past few decades. So education, libraries, health and social care all have to have a financial worth — everything is reduced to whether it has a value that can be worked out on a calculator.

“But if you think the railways ought to be run for the people who use them rather than making a failed balloonist extremely rich, this is an exciting time.

“Ideas that have been on the back burner for 30 years are now on the agenda. Young people really do believe that we should look after the old and sick, and I think that’s optimistic and encouraging.

“I’m not trying to win people around, but I think the demonisation of Jeremy Corbyn has been so mental that it’s funny — I struggle to come up with worse things in the show than what the right-wing press say about him, like he’s going to introduce women-only gravity, so men are forced to float, or something.”

The comic’s audience is a broad church. Many listen to his long-running Radio 4 show, Mark Steel’s in Town, but he also has a younger following from the short films he posts on YouTube and his amusingly waspish Twitter feed.

Twitter is both a vexation and a source of amusement.

“There is not one single selection of words that you can put on Twitter that someone wouldn’t go berserk about. If I tweeted ‘I’m enjoying a beautiful sunset in Dorset’ I can guarantee someone would reply, ‘Not so beautiful if you suffer from sunset aversion in Dorset syndrome. Have a thought for SADS sufferers, Mark.”

He doesn’t get into Twitter spats — “You’d be there all day if you did” — but enjoys seeing “the large number of faux liberals on it moaning because someone uses the wrong word for trans people, or Benedict Cumberbatch said something offensive to otters”.

Some of his views may surprise you — “I don’t condemn people who voted for Brexit, as some do. I don’t think they’re all idiots and I can see why they came to that conclusion” — and even admits to a certain regard for the Queen after learning of her disagreement with Margaret Thatcher over apartheid.

Mark is now living in London with his son, Elliot, 21, who is also a stand-up, and his 17-year-old daughter.

“I’m quite chirpy at the moment,” he says. “I rang home the other day and Elliot was doing the washing and I thought ‘Ah, life’s nice, isn’t it?”

Mark Steel plays the Kenton Theatre on Friday, February 7. The show starts at 8pm and has a running time of 120 minutes, including a 20-minute interval.